Oppo K9 5G will launch in China on May 6 along with a new Oppo smart band and TWS earphones. 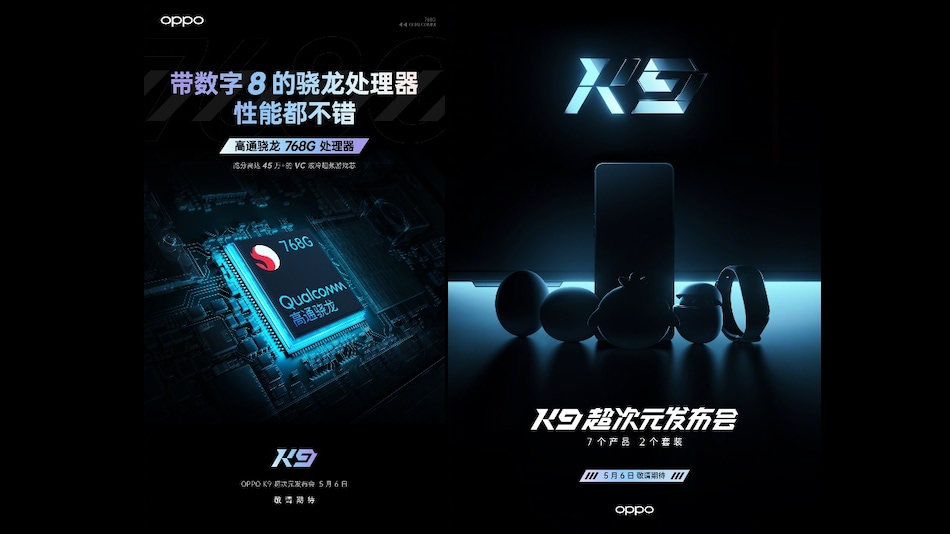 Oppo K9 5G will be launched with a Qualcomm Snapdragon 768G SoC, the Chinese company has confirmed via a post on Weibo. The smartphone will be launched in China on May 6. Previous reports suggest that Oppo may also launch the Oppo Enco Air TWS earbuds and a new Oppo smart band alongside. The company has also teased both the devices in a separate post and they have already been listed on an e-commerce website in China.

As per a post by Oppo on Weibo, the Oppo K9 5G will be powered by a Qualcomm Snapdragon 768G SoC with a clock speed of 2.8GHz for faster gaming performance. The SoC has an Adreno 620 GPU and a Kryo 475 CPU that enable 15 percent faster graphics rendering and performance improvement, respectively, as compared to the Snapdragon 765G. It also confirmed that the smartphone will also have a VC liquid cooling technology (translated) to keep the temperature of the handset under check during gaming sessions.

All three devices have already been listed on JD.com. The listing suggests that the Oppo K9 5G will have Blue and Grey colour variants. The phone is likely to come with 8GB RAM + 128GB storage and 8GB RAM + 256GB storage configurations. It is also listed to come with 65W fast charging and a hole-punch cutout for the selfie camera. Details about the TWS earphones and the smart band have not been revealed by Oppo yet. But the earphones are said to support Bluetooth v5.2 and come in Black and White colour options.

A previous post by Oppo had confirmed that the smartphone will have a triple rear camera setup, headlined by a 64-megapixel primary sensor.

Healthcare Products You Can Buy on Amazon, Flipkart During COVID-19 Pandemic