Oppo K7x will be available in China under the Double Eleven sale on November 11. 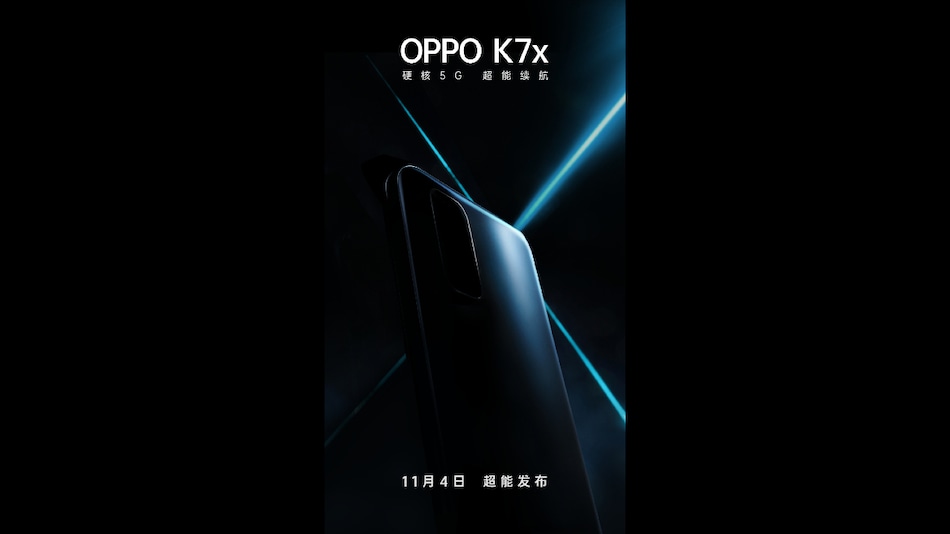 Oppo K7x, a new smartphone in the K series, is set to launch for November 4, the Chinese company on Thursday revealed through a teaser posted on Weibo. The official teaser image also highlights that the new Oppo phone will come with 5G support. The Oppo K7x is likely to be similar to the Oppo K7 that was launched in August, with quad rear cameras. Although its initial availability will be limited to China, the phone may make its way to some global markets at a later stage.

As per the teaser posted on Weibo, the Oppo K7x will launch on November 4 and will be available in China under the Double Eleven sale — a local shopping festival that takes place on November 11 and is popularly known as Singles' Day.

In addition to the release date, the Oppo K7x teaser hints at its design. The smartphone appears to have a rectangular camera module at the back and no rear-mounted fingerprint sensor. The latter part suggests that it could come with either an in-display fingerprint sensor or a side-mounted one. Further, there is a gradient back finish.

Oppo K7x specifications are yet to be revealed officially. However, as reported by technology blog Gizmochina, the new model seems to be the unannounced phone that surfaced on China's TENAA site just earlier this month. That phone carried a model number Oppo PERM00 and was seen with a back panel that looked quite similar to what has now been teased by Oppo. In terms of specifications, the TENAA listing suggested that the phone runs on Android 10 and features a 6.5-inch full-HD+ (1,080x2,400 pixels) display. It was also found to have an octa-core SoC under the hood, paired with 6GB and 8GB RAM options.

The 5G-supporting Oppo phone was also listed with 64GB, 128GB, and 256GB of onboard storage options. On the optics part, the TENAA listing showed that the phone includes a quad rear camera setup on top of the rectangular module, with a 48-megapixel primary sensor, 8-megapixel secondary sensor, and two 2-megapixel sensors. There is also a 16-megapixel camera sensor at the front.

Oppo also seems to offer a 4,910mAh battery on the new smartphone. It is, however, unclear whether it would include any fast charging support. Besides, the phone measures 162.2x75.1x9.1mm and weighs 194 grams.