Oppo K7x display will have a 90Hz refresh rate and a 180Hz touch sampling rate. 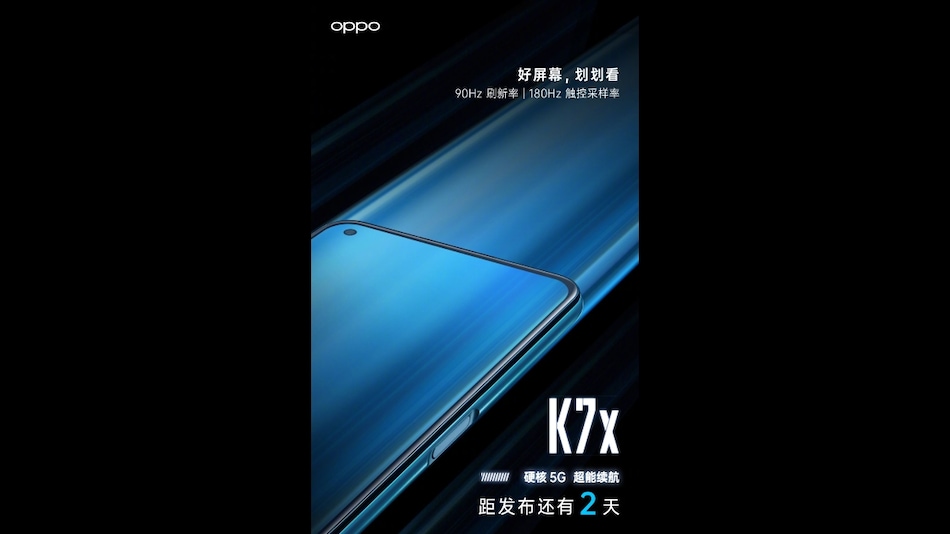 Oppo K7x has surfaced on Geekbench as per a report, which along with a new official teaser reveals some key specifications. The smartphone is being launched in China on November 4. The listing shows that Oppo K7x scored 511 in Geekbench's single-core test, and 1,644 in the multi-core test. An official teaser of the Oppo K7x also appeared on Weibo ahead of the launch, which reveals that the smartphone's display will have a 90Hz refresh rate and a 180Hz touch sampling rate.

The official teaser on Weibo by Oppo, meanwhile, features the phone with a single punch-hole cutout for the selfie camera in the front. The fingerprint scanner is located on the right.

Oppo K7x will be unveiled in China on November 4. It will be available under the Double Eleven sale in China— a local shopping festival that takes place on November 11 and is popularly known as Singles' Day. There is no information about when the phone will make its way to global markets. The price of the smartphone has also not been revealed yet.

As per earlier reports, the Oppo K7x features a 6.5-inch full-HD+ (1,080x2,400 pixels) display. A TENAA listing suggests that it will be offered in 64GB, 128GB, and 256GB storage configurations. The listing also says that the phone will have a quad rear camera setup featuring a 48-megapixel primary sensor. The smartphone is expected to pack a 4,910mAh battery.