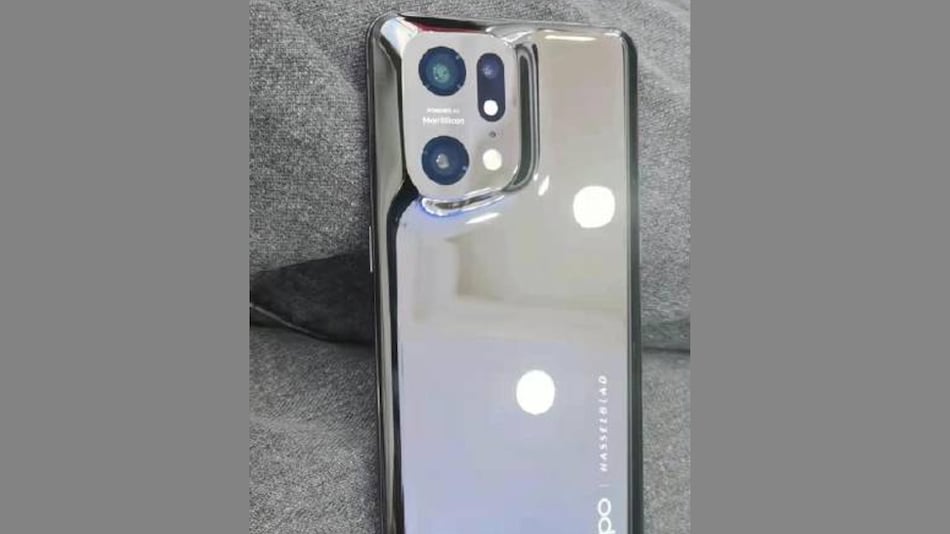 Oppo Find X5 Pro may carry Hasselblad branding on the back

Oppo Find X5 Pro, a rumoured high-end handset from the Chinese smartphone brand, is reportedly making its way to the market soon along with other Oppo Find X5 series phones. The handset is yet to be officially confirmed by Oppo but renders of the phone have now surfaced online. The renders show a reflective rear panel and a redesigned camera system. Oppo Find X5 Pro is likely to be powered by the latest Qualcomm Snapdragon 8 Gen 1 SoC. The upcoming handset is expected to succeed the Oppo Find X3 Pro that was unveiled in March last year.

A Weibo post by Evaluation Shop (translated), as spotted by Sparrows News, shows a live shot of the Oppo Find X5 Pro smartphone. In the images, the Oppo handset is seen in Black and Blue colour options with a different rear camera design compared to its predecessors. The images show a reflective rear panel. As per the report, both colour variants come with ceramic rear shells. In the leaked images, multiple camera sensors are seen arranged in the rear panel. The renders also show “Powered by MariSilicon” text written between the two main lenses. A Hasselblad logo is seen in the bottom right corner of the rear panel.

Previously tipped specifications of Oppo Find X5 Pro include a 6.7-inch 2K+ (1,440x3,216 pixels) display with 120Hz refresh rate and LTPO 2.0 technology. As mentioned, the handset could pack a Qualcomm Snapdragon 8 Gen 1 SoC under the hood.

For optics, Oppo Find X5 Pro is tipped to sport a triple rear camera unit, headlined by two 50-megapixel Sony IMX766 sensors. The primary sensor is said to get optical image stabilisation (OIS). The third camera is expected to get a 13-megapixel Samsung ISOCELL S5K3M5 sensor. The upcoming handset is said to pack Oppo's MariSilicon X chipset. For selfies, the phone could feature a 32-megapixel Sony IMX709 sensor at the front.

However, Oppo is yet to confirm any details about its Oppo Find X5 flagship series, so the reported details should be taken with a pinch of salt.