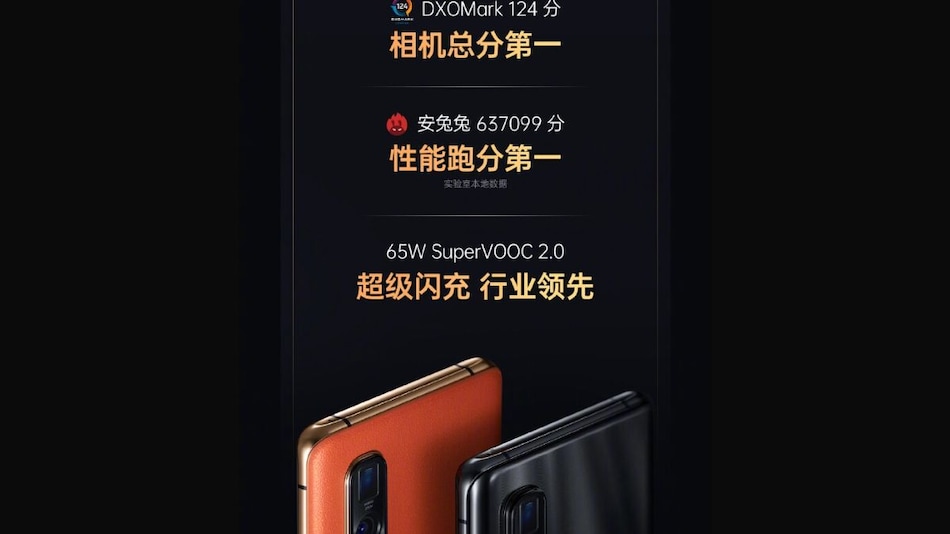 Oppo Find X2 Pro was launched at the beginning of March

Oppo's Find X2 Pro smartphone that was officially launched last week seems to be setting a new benchmark with each passing day. After receiving the highest score for its camera performance on DxOMark, Oppo's latest flagship device has now achieved a score of 6,11,627 from AnTuTu for its overall phone performance, as per the company. Not only this, the Oppo Find X2 has also been awarded an A+ rating by DisplayMate, for the smartphones' display features. Previously, similar screen ratings were awarded to the Samsung Galaxy S20-series which was released in February.

The news was also shared by Oppo on Weibo where it listed the latest scores given by the various benchmarking websites. Oppo, however, highlighted the AnTuTu scores as 637,009, which differed from what was observed on AnTuTu's Weibo post. If the claims made by Oppo are true, the Find X2 Pro becomes the highest rated smartphone by AnTuTu in terms of overall phone performance. As per the AnTuTu's own listing, which has a lower score for the Find X2 Pro, the CPU of the 12GB RAM + 256GB variant of Oppo Find X2 Pro received more than 184,000 points. Whereas the GPU score of the smartphone exceeded 220,000, while the MEM score exceeded 106,000, and the UX score exceeded 97,000, as per AnTuTu.

DisplayMate, which evaluates device screen and display, gave an A+ rating to Oppo Find X2. As per DisplayMate, the Find X2 has a "very impressive excellent top tier world class smartphone display with close to text book perfect calibration accuracy and performance that is visually indistinguishable from perfect."

To recall, the dual-SIM (Nano) Oppo Find X2 Pro comes with Android 10 out-of-the-box with ColorOS 7.1 on top. The phone also features a 6.7-inch QHD+ (1,440x3,168 pixels) Ultra Vision OLED display along with up to 120Hz refresh rate. Additionally, the phone is powered by the octa-core Qualcomm Snapdragon 865 SoC, coupled with Adreno 650 GPU and 12GB LPDDR5 RAM.

On the day of its launch, DxOMark Image Labs had published the review of the Oppo Find X2 Pro's camera where it ranked the device at the top of the list with 124 points. The website commended the camera for its overall "balanced performance." In terms of the camera specifications, Oppo's flagship smartphone packs a triple rear camera setup that includes a 48-megapixel primary Sony IMX689 sensor with an f/1.7, seven-piece lens. The camera setup also houses a 48-megapixel Sony IMX586 sensor with an f/2.2 lens that has a field of view (FoV) of 120 degrees and a 13-megapixel sensor with a periscope-shaped f/3.0 telephoto lens.