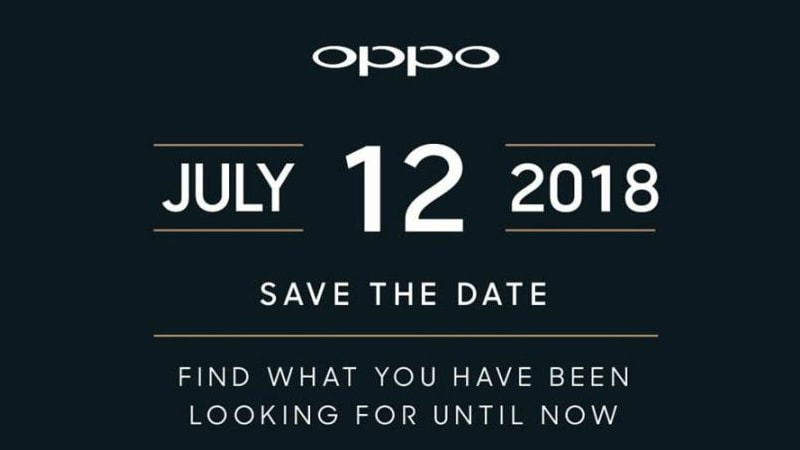 Oppo is all set to launch the Oppo Find X smartphone in Paris later today, and ahead of that the company has sent out invites for an event in Delhi next month. The event is set to be held on July 12, and the Oppo Find X is largely expected to be launched in the country. The smartphone is expected to launch in China today, and ahead of that, the design and specs have also been confirmed. Also, the smartphone was shown off almost in its entirety thanks to an early hands-on report being published.

The invite has a tagline that reads, "Find what you have been looking for until now", and while that doesn't give out any clues, we do expect the Find X to launch on July 12 in India. The smartphone has been teased continuously by Oppo's official Weibo account and its India Twitter account has been hinting at its arrival in the country as well. The smartphone is expected to be available in China first, and is tipped to be positioned in the premium smartphone range, given its specifications and design rumours. A recent leak tipped it to be priced at over CNY 4,500 (roughly Rs. 47,500) in China.

Separately, The Verge has already published a hands-on report on the Oppo Find X, giving us an almost complete look at the smartphone along with most of its specifications. The smartphone has a bezel-less display with a small chin, and a camera slider. Other features of the Find X include 3D facial scanning as the chief method of unlocking the smartphone, as there is no fingerprint scanner onboard. The Verge reports that once you turn the phone on and swipe on on the lock screen, the camera slider comes up to scan your face.

Oppo Find X seen from front and back, with camera slider open and closed
Photo Credit: The Verge

As we can see from the shared images, the Oppo Find X smartphone has a nice shiny metal back with no camera sensors up front or at the back. Instead, there is a motorised slider that opens and closes automatically whenever you open or close the camera app. The camera slider is said to open in 0.5 seconds after opening the camera app. The slider consists of a dual camera setup at the rear end, and a single front camera. The front is all display, with a slight Galaxy S9-like curve around the side edges. The Oppo Find X has an OLED display that looks quite neat, and the report also states that the Oppo Find X has a screen-to-body ratio of 92.25 percent. The Oppo Find X also comes with VOOC fast charging.

Coming to the specifications, the Oppo Find X runs on Color OS 5.1 based on Android 8.1 Oreo, and sports a 6.4-inch display . The phone is powered by a Qualcomm Snapdragon 845 SoC, paired with an Adreno 630 GPU, 8GB of RAM, and up to 256GB of inbuilt storage.

As for camera specifications, the Find X sports a dual rear camera setup with 20-megapixel and 16-megapixel sensors, apart from a 25-megapixel front camera. A 3730mAh battery powers the internals from underneath the hood.

Are Vivo Nex and Oppo Find X revolutionary phones or overpriced prototypes? We discussed this on Orbital, our weekly technology podcast, which you can subscribe to via Apple Podcasts or RSS, download the episode, or just hit the play button below.