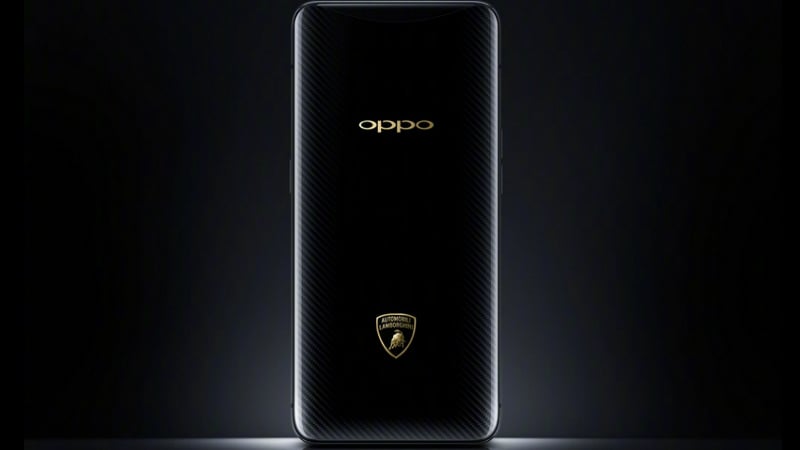 Alongside the Oppo Find X, the company has also launched the Oppo Find X Automobili Lamborghini Edition, developed in collaboration with the carmaker's design house. This variant has more storage, and is the first phone with Super VOOC Flash charge. The tech was launched a couple of years ago at MWC, and with the latest implementation, it takes 35 minutes to fully charge the smartphone's 3400mAh battery. The storage on this variant has also been amped up to 512GB. The smartphone has a carbon fibre back, instead of the shiny metallic finish seen on the base variant, and the Lamborghini logo is pasted on the back of the phone as well as the fast charging adapter.

At the Paris event, Oppo announced that the Oppo Find X Automobili Lamborghini Edition will be priced at EUR 1,699 (roughly Rs. 1,34,400). The base variant will cost you EUR 999 (roughly Rs. 79,000) and will be made available in August. It still is unsure whether this variant will be launched in India or not, but an event is scheduled for July 12 where we expect to get more details. A China event is scheduled for June 29.

Apart from the carbon fibre back, the Oppo Find X Automobili Lamborghini Edition is the same as the base variant. The smartphone has a bezel-less display with a small chin, and 3D facial scanning as the chief method of unlocking the smartphone, as there is no fingerprint scanner onboard. It has camera sensors up front or at the back. Instead, there is a motorised slider that opens and closes automatically whenever you open or close the camera app. Once you turn the phone on and swipe on the lock screen, the camera slider comes up to scan your face. As mentioned, the camera slider is has tested over 300,000 times for durability. The slider consists of a dual camera setup at the rear end, and a single front camera. The front is all display, with a slight Galaxy S9-like curve around the side edges.

To make up for the lack of fingerprint recognition, Oppo has introduced a unique facial scanning technology called the O-Face Recognition on the Find X. This is enabled by a 3D Structured Light Technology that the company claims has never been used on any Android smartphone. The technology uses 15,000 facial dot recognition and intelligent analysis to read a face. There's also an IR sensor that lets O-Face work in the dark as well. Oppo claims that O-Face Recognition is 20 times safer than fingerprint recognition for unlocking the phone.

Oppo's AI-assisted sensor also brings animated 3D emojis - just like the ones seen on the iPhone X. The company is calling it 3D Omoji, and it lets you choose a funny image or create a personal cartoon image to mimic your facial expression in real time.

The latest Oppo offering runs on Android 8.1 Oreo based on ColorOS 5.1 and supports dual-SIM slots (Nano+Nano). It comes with a 6.42-inch (1080x2340 pixels) full-HD+ AMOLED display with 18:5:9 aspect ratio, 93.8 percent screen to body ratio, and Corning Gorilla Glass 5 protection. The smartphone is powered by an octa-core Snapdragon 845 SoC with Adreno 630 GPU and 8GB RAM. There's 512GB internal storage offered on the phone as well, with no storage expansion.

Coming to optics, the Oppo Find X sports a camera slider that has a dual camera setup at the back. It consists of a 16-megapixel rear camera with LED flash, OIS and f/2.0 aperture, and a 20-megapixel secondary camera with f/2.2 aperture. Features like AI portraits and AI Scene Recognition technology are integrated. Up front, there is a 25-megapixel sensor with f/2.0 aperture for selfies and video calling. The AI-enhanced 3D Camera is equipped with a 3D lighting techniques and filters for artistic portraits.

Are Vivo Nex and Oppo Find X revolutionary phones or overpriced prototypes? We discussed this on Orbital, our weekly technology podcast, which you can subscribe to via Apple Podcasts or RSS, download the episode, or just hit the play button below.