Oppo Find 7 Now Available For Pre-Order, Starts Shipping From May 29 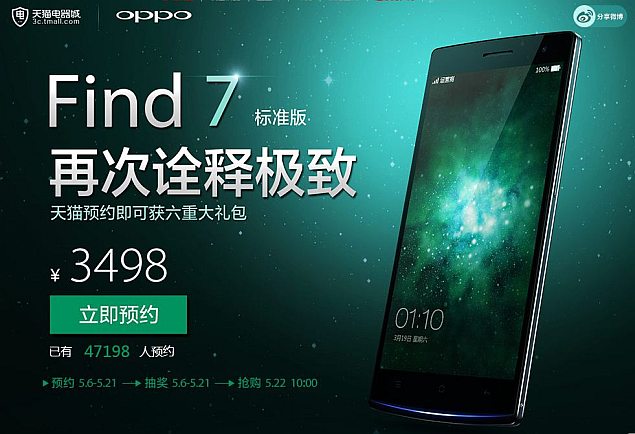 Oppo had taken off the wraps from its Find 7 smartphone back in March, alongside its lite-variant the Oppo Find 7a. Now the smartphone has gone up on pre-order in China and will start shipping from May 29.

As we know from the initial announcement, the Oppo Find 7 is priced in China at CNY 3,498 (approximately Rs. 34,500), though it was earlier expected to be launched sometime in May or June. Till date, no exact word on global availability is available, Oppo is expected to launch the Find 7 in India by mid-2014.

The touted as the world's first smartphone to sport a QHD display, the Oppo Find 7's 5.5-inch screen offers a resolution of 1440x2560 pixels and boasts of an impressive 538ppi pixel density. The smartphone runs a customised Android 4.3 Jelly Bean OS, which the company dubs ColorOS 1.2.

The Find 7 is powered by a 2.5GHz quad-core Snapdragon 801 (MSM8974AC) processor, clubbed with 3GB of RAM and 32GB of inbuilt storage with expandable storage support.

The Oppo Find 7 sports a 13-megapixel Sony Exmor IMX214 sensor rear camera with LED flash, and also houses a 5-megapixel front-facing camera with BSI sensor. The smartphone can record 4K videos and also record 720p videos at 120fps for slow motion, according to the company.

It packs a 3000mAh battery, which the company says can charge up to 75 percent in 30-minutes of charging thanks to the Rapid Charge technology. Connectivity options on the Oppo Find 7 smartphone include Wi-Fi, Bluetooth, GPS/ A-GPS, USB OTG (on-the-go), 3G and 4G LTE.

Earlier, Oppo India CEO, Mr. Tom Lu, while speaking about its eaxpansion plan in India had said, " The Oppo N1 marked our entry into the Indian market and our forthcoming products including the soon-to-be-launched Oppo Find 7 will enable us to replicate our global success story here."