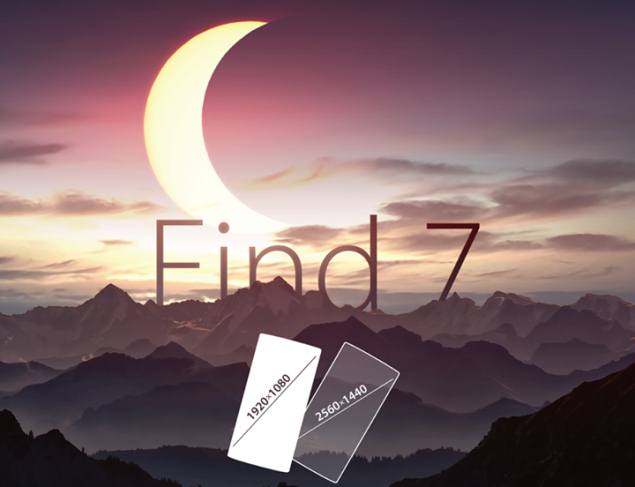 Oppo on Tuesday has put an end to the two variants rumour of the Oppo Find 7, with a confirmation on its social media platforms ahead of the smartphone's launch on March 19.

The Chinese manufacturer on Tuesday posted two different teaser images to Facebook and Sina Weibo, mentioning the two different resolutions for the Oppo Find 7. Both posts reveal that the company will launch a Oppo Find 7 variant with a Quad-HD (1440x2560 pixel) display, and another with a full-HD (1080x1920 pixel) display. "Two models of the Find 7 are coming on March 19. #Find7 #AlwaysImprove", the Facebook post says.

Few confirmed specifications for Oppo Find 7 Quad-HD variant, from previous teasers, are that, include a 5.5-inch display at 538ppi, and 4G LTE connectivity. The company will also debut a new 'Touch On Lens' feature with their upcoming flagship. The storage capacity on the device is unknown but it is confirmed to have an expandable storage.

Apart from these official details, several rumours have indicated other specifications of the Oppo Find 7. The wildest rumour of these is about the 50-megapixel camera, which might only be on the premium Quad-HD variant of the device. Oppo published a 6120x8160 pixel (9.7MB) sample image on its Chinese social media account, and the resolution of the image does match a 50-megapixel camera image.

So far, the company has been teasing the Find 7 in various ways on different social platforms. Last month, Oppo had posted a cryptic teaser on its Weibo page, which was decoded as an announcement for its 19 March 2014 launch event in Beijing, China. Later the announcement was confirmed with an official video (see below) on its official Facebook page.
Affiliate links may be automatically generated - see our ethics statement for details.
Comments