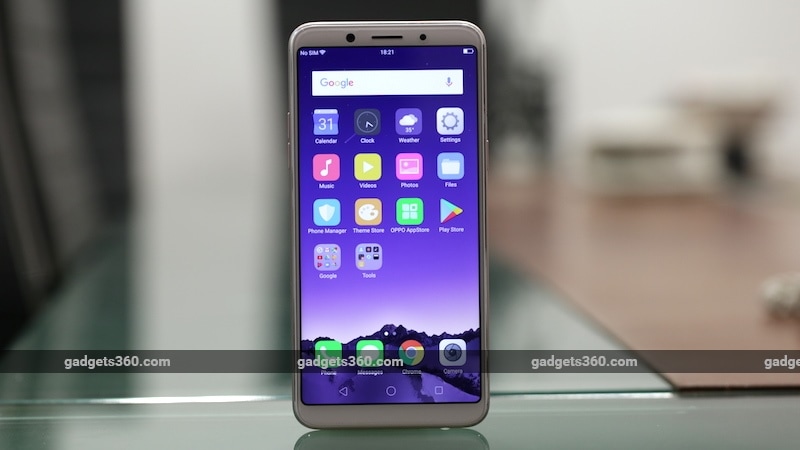 Oppo F5 comes in two variants in India, one with 4GB RAM and the other with 6GB RAM

Oppo F5 selfie smartphone has been launched in India, just a week after it was unveiled in the Philippines. The key highlights of Oppo F5 are the AI-powered beautification features, the 20-megapixel front camera, and the 18:9 'Full Screen' display. Two F5 variants have been launched in India, with differences in internal storage and RAM. The selfie-focused smartphone will be exclusive to Flipkart online, and the e-commerce brand has announced launch offers to make the deal more lucrative. Apart from the online brand, the new Oppo phone will also be available via offline stores across the country.

Alongside the F5, the company also announced the Oppo F5 Youth with a 6-inch display and AI beautification features, which will be launched in India in December, but no other details of the smartphone are available at the moment.

Flipkart has detailed pre-order offers for the smartphone, which will be available from November 2 to November 8. offering exchange discount of up to Rs. 18,500 with the phone. The e-commerce brand is also offering 15 percent extra discount on fashion and lifestyle products on its platform. They will get 5 percent cashback on purchases made via debit and credit cards, and an additional 5 percent off on Axis Bank Buzz Credit Card purchases. Finally, a BuyBack Guarantee of Rs. 9,300 is also being offered.

As we mentioned, the highlight feature of the Oppo F5 is its AI-powered beautification tech for the front camera. The company is touting over 200 positioning spots that will enable the smartphone's software to accentuate facial features and enhance symmetry to beautify selfies. Also being touted is an iris tool that makes eyes shine brighter in photos, as well as a Bokeh mode. The company is also touting features like O-Share (said to be faster than Bluetooth for file transfer between Oppo phones), Game Acceleration, and Facial Unlock. It sports a fingerprint sensor on the rear panel.

Coming to the Oppo F5 specifications - the dual-SIM (Nano) smartphone runs ColorOS 3.2 based on Android 7.1 Nougat, and is powered by a MediaTek MT6763T octa-core SoC coupled with either 4GB or 6GB of RAM. It has a 6-inch full-HD+ (1080x2160 pixels) LTPS 'Full Screen' display with Corning Gorilla Glass 5. The smartphone sports a 20-megapixel front camera with an f/2.0 aperture, and on the rear, it sports 16-megapixel camera with dual-LED flash and an f/1.8 aperture.

The Oppo F5 has been launched in two storage variants - 32GB and 64GB - both of which are expandable via microSD card (up to 256GB) with its own dedicated slot. Connectivity options include 4G VoLTE, Bluetooth v4.2, dual-band (2.4GHz and 5GHz) Wi-Fi 802.11 a/b/g/n, GPS/ A-GPS, Micro-USB with OTG support, and a 3.5mm audio jack. Sensors on board include accelerometer, ambient light sensor, digital compass, and proximity sensor. It is powered by a 3200mAh battery. The Oppo F5 weighs 152 grams and measures 156.5x76x7.5mm.