Oppo F19s launch in India will take place at 3pm on Monday, September 27. 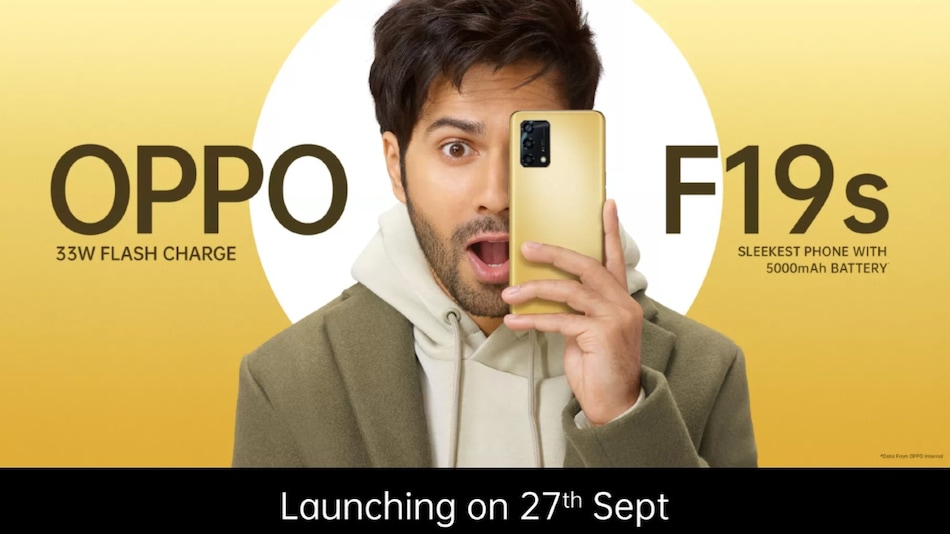 Oppo F19s launch in India is taking place next week

Oppo F19s launch date in India is set for September 27, Flipkart revealed on Wednesday through a dedicated listing on its site. Oppo also separately posted a tweet to confirm the launch date. The Oppo F19s is teased to come with 33W Flash Charge fast charging and feature triple rear cameras. The phone will also come with a hole-punch display and include two colour options. Separately, the Oppo F19s has purportedly appeared on Geekbench that has suggested some of its key specifications.

Flipkart has created a microsite to reveal the launch date of the Oppo F19s and indicate that the phone will be available in Glowing Black and Glowing Gold colours. Oppo also confirmed through a tweet that the launch will take place virtually at 3pm on Monday, September 27.

Oppo has released a couple of teasers on Twitter to confirm that the Oppo F19s will come with a hole-punch display design and triple rear cameras. One of the renders available on Flipkart also suggests that the phone features a 48-megapixel primary camera sensor at the back. Further, the phone is teased to have a 5,000mAh battery with 33W Flash Charge fast charging support. The Oppo F19s will feature a 3D curved body with a 7.95mm thickness, according to a teaser available on Flipkart.

In addition to the teasers, the Oppo F19s specifications have been suggested by a Geekbench listing. The phone is listed with a model number CPH2223 that is believed to be of the Oppo F19s. It suggests that there is an octa-core Qualcomm Snapdragon 662 SoC, along with 6GB of RAM. The listing also suggests that the Oppo F19s runs on Android 11 out-of-the-box.

Previous rumours suggested that the Oppo F19s would include a 6.43-inch full-HD+ AMOLED display and a 16-megapixel selfie camera sensor.

Alongside the Oppo F19s, Oppo seems to have plans to launch the Oppo Reno 6 Pro 5G Diwali Edition and a Blue colour variant of the Oppo Enco Buds true wireless stereo (TWS) earphones in the country. Flipkart has featured both the new devices with the Oppo F19s listing with a “coming soon” tag. The launch may take place around Flipkart Big Billion Days 2021 that is starting on October 7.

Last year, Oppo introduced the Oppo F17 Pro Diwali Edition with a distinct colour option and a special gift box packaging that included a 10,000mAh power bank and a Diwali-Exclusive Back Cover. The festive-edition model was Rs. 1,000 costlier than the regular Oppo F17 Pro.