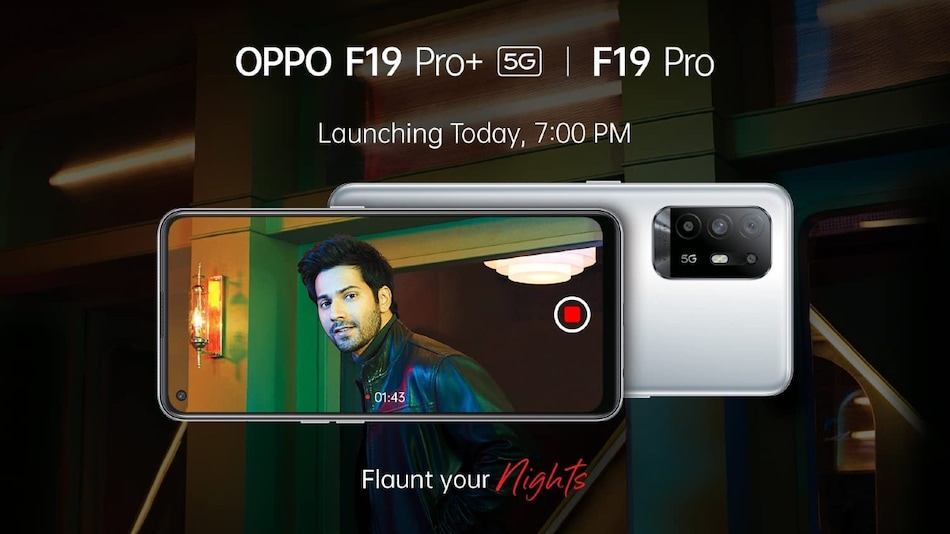 The Oppo F19 Pro series launch in India will take place virtually at 7pm IST. The launch will be livestreamed through Oppo India official channels on Facebook, Instagram, Twitter, and YouTube. You can also watch the event live through the video embedded below.

Tipsters Ishan Agarwal and Sudhanshu Ambore recently teased the specifications of the Oppo F19 Pro+ and Oppo F19 Pro. Oppo has also released some teasers about the upcoming phones.

According to the leaks and teasers, the Oppo F19 Pro will run on Android 11 with ColorOS 11.1 and feature a 6.43-inch full-HD+ Super AMOLED display. It is also said to have an octa-core MediaTek Helio P95 SoC, along with up to 8GB of RAM and 128GB of onboard storage. The smartphone could also offer a quad rear camera setup with a 48-megapixel primary sensor, an 8-megapixel ultra-wide-angle shooter, a 2-megapixel portrait sensor, and a 2-megapixel macro sensor. There would also be a 16-megapixel selfie camera sensor at the front.

The Oppo F19 Pro is also said to have a 4,310mAh battery with 30W VOOC flash charge. It is also speculated to have a USB Type-C port, 3.5mm headphone jack, and an in-display fingerprint sensor.

The Oppo F19 Pro is also expected to come with ColorOS 11.1 out-of-the-box and come with a 6.4-inch AMOLED display. It may offer MediaTek Dimensity 800U SoC, along with 8GB of RAM and 128GB of storage. On the optics front, the phone is speculated to have a triple rear camera setup with a 64-megapixel primary sensor, an 8-megapixel ultra-wide-angle shooter, and a 2-megapixel depth sensor. It is also likely to have a 32-megapixel selfie camera sensor. Further, the Oppo F19 Pro+ is said to have a 4,500mAh battery with 30W fast charging.

Amazon has already listed the Oppo F19 Pro series as well as the Oppo Band Style to confirm their online availability following the official launch.