Oppo F17 Pro Teased to Launch in India With a 7.48mm Thin Design 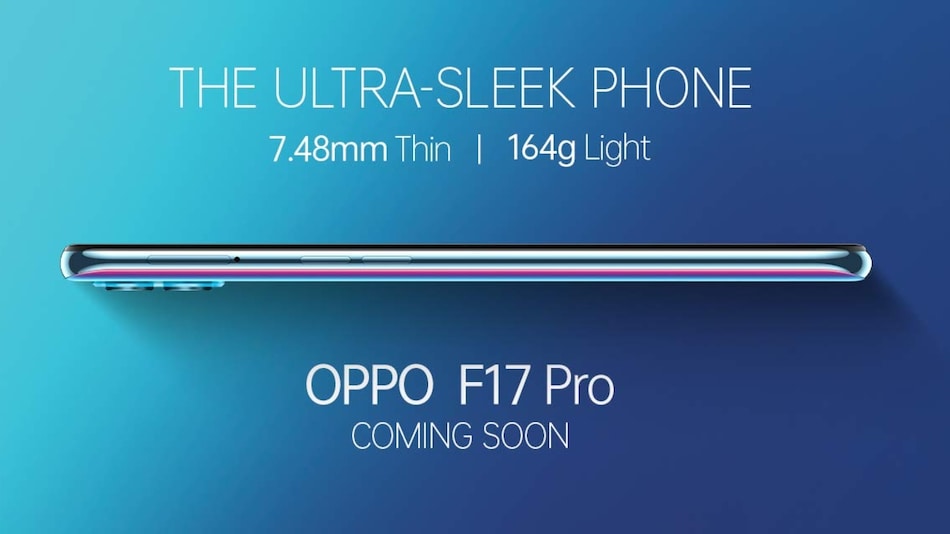 Oppo F17 Pro image showing its side has been released officially

Oppo F17 Pro is coming soon to India, the company teased through a GIF on Thursday. The new smartphone is touted to be the “sleekest phone of 2020” with a thickness of 7.48mm. Alongside the teaser posted by Oppo, Amazon India has created a microsite to suggest the online availability of the Oppo F17 Pro in the country. The handset will come as the latest in the company's F series - after the Oppo F15 that was launched in January.

As per the teaser posted through the Oppo India Twitter account, the Oppo F17 Pro will come in a metal-finished build with a rounded edge design. The phone will weigh 164 grams and feature a slim chassis that will be just 7.48mm thick.

Want a new way to flaunt? ???? The sleekest phone of 2020 is on its way. Stay tuned. #OPPOF17Pro #FlauntItYourWay pic.twitter.com/LVmAKE1jE1

Shortly after tweeting the teaser, Oppo sent a press note highlighting the arrival of the F17 Pro in the country. The note didn't provide any details about its specifications, though it mentioned that the phone would come with a 220-degree edge design. “The ultra-sleek body of the Oppo F17 Pro ensures that it easily slides into the pocket or can be tucked into the bag with ease without causing any bulge,” it said.

The microsite on Amazon.in also shows the Oppo F17 Pro from one side. Furthermore, the online marketplace suggests the existence of the Oppo F17 alongside the F17 Pro as its microsite is titled Oppo F17 series.

Oppo is yet to reveal the launch date of its new smartphone series in the country. Nevertheless, considering the latest developments, the F17 Pro is likely to debut in the coming days.