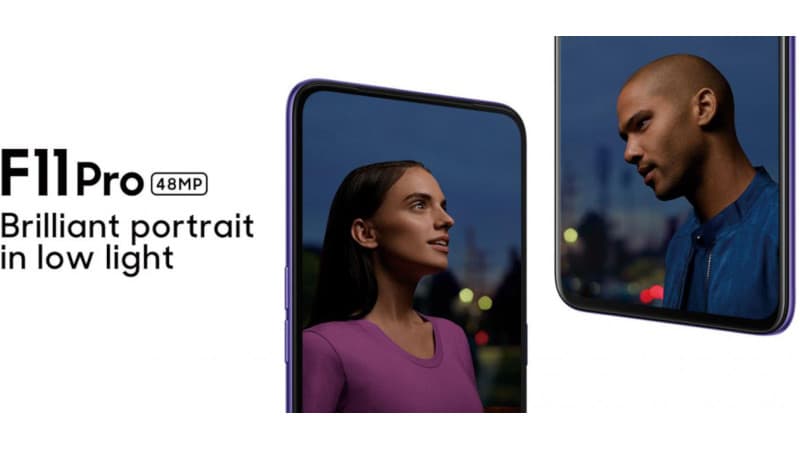 Oppo F11 Pro price is a mystery right now, but it will be announced on March 5

Oppo F11 Pro is all set to launch in India on March 5, and ahead of that the phone has been spotted on Geekbench, revealing key specifications. Most importantly, the phone is listed to be powered by a MediaTek chipset and packing 6GB RAM. The phone is tipped to be powered by the MediaTek Helio P70 SoC and run on the latest Android Pie software based on Color OS 6 skin customisations. Separately, Oppo has revealed that the F11 Pro will include a dual camera setup on the back with a 48-megapixel primary sensor. The smartphone's full specifications were also leaked recently, and they are detailed below.

Oppo F11 Pro detailed specifications were also leaked by MySmartPrice recently. The report reiterates that the phone will be powered by the MediaTek Helio P70 SoC, pack 6GB RAM, and run on Android Pie. The phone features a 6.5-inch FHD (1080x2340 pixels) LTPS LCD display with 90.9 percent screen-to-body ratio. The phone is tipped to come in two storage options - 64GB and 128GB.

The report reiterates that the phone will sport a 48-megapixel (f/1.79 aperture) and a 5-megapixel (f/2.4 aperture) dual rear camera setup, and a 16-megapixel selfie snapper with f/2.0 aperture). The phone is tipped to pack 4,000mAh battery, and connectivity options include Wi-Fi 802.11 a/b/g/n/ac dual-band, Bluetooth 4.2, GPS with A-GPS, GLONASS, and BeiDou. The F11 Pro is listed to measure at 161.3x76.1x8.8mm and weigh around 190 grams. According to the report, the phone will be available in Thunder Black and Aurora Green colour options.

The Oppo F11 Pro has been teased a lot before the release - including confirmation of 48-megapixel camera in its dual rear camera setup. The phone is also confirmed to include VOOC 3.0 fast charging support and a Super Night mode for better low-light photography. Also confirmed is a pop-up selfie camera, a notch-less display, and a 3D gradient casing. A rear fingerprint sensor was also confirmed. The company will be hosting a press event in Mumbai on March 5.

a hands-on video leaked recently, also showed off its purple colour gradient back panel. The phone is also expected to come in a blue colour option as well.