Oppo ColorOS 12 will be rolled out in India in November starting with Oppo Reno 6 Series. 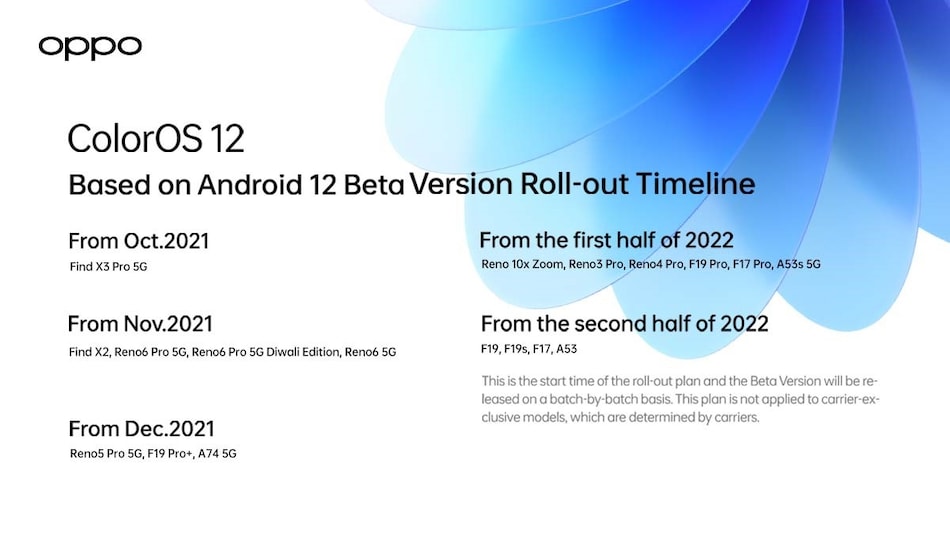 Oppo on Monday unveiled the global version of its Android 12-based custom ROM, ColorOS 12, after first unveiling the China-specific version first in September. With the announcement, the company has revealed new operating system (OS) by Oppo will be released in India in November, and detailed other rollout plans. ColorOS 12 also adds support for 13 major Indian languages along with 54 other languages. Oppo mentions that its Android 12-based OS has incorporated stock-Android based features like Material You. Oppo Find X3 Pro will be the first smartphone to receive ColorOS 12 public beta update. The new OS also has many privacy, security, and productivity features, along with a redesigned user interface (UI).

ColorOS 12 global version based on Android 12 will be rolled out for Oppo and OnePlus. It will first make its way to the public as a public beta update for Oppo Find X3 Pro users in Indonesia, Malaysia, and Thailand. Oppo has also given a rollout schedule for the global version of the new OS and mentions that the public beta update will reach India next month - starting with Oppo Reno 6, Oppo Reno 6 Pro, and Oppo Reno 6 Pro Diwali Edition. The rest of the devices and the markets will be receiving the update by the second half of 2022. Oppo mentions that it plans to roll out the new ColorOS to over 110 devices and 150 million users.

Oppo's ColorOS 12 global version is built on top of Oppo's Infinite Design concept and packs softer icons and animations. It has also incorporated Android 12's wallpaper-based theming system with Material You. Oppo has also included App Cloner with the latest version of ColorOS. Oppo has mentioned that it has made the ColorOS 12 more developer-friendly by adding free camera SDKs that covers ultra steady video shooting, HDR, super wide-angle, and more. Additionally, it has become more developer-friendly with its HyperBoost and colour vision enhancement.

The original China-specific ColorOS 12 was first announced with a rollout schedule in September, with mostly the same features. It also gets Quick View cards and new shortcuts that include a click to switch to a small window, double click to switch to full screen, and the ability to adjust the size of the floating window. It also comes with a new 3D avatar feature called Omoji.