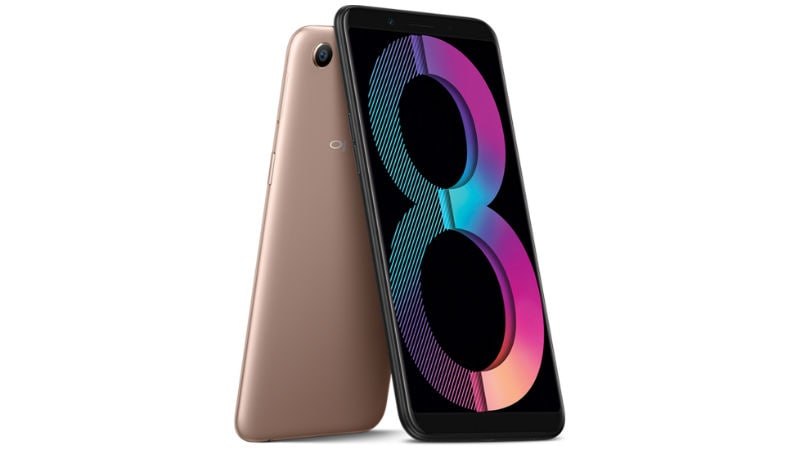 Oppo A83 was launched in India on Wednesday, its new mid-range smartphone in India. The new handset - which features Face Unlock tech - comes with a price tag of Rs. 13,990, a price Gadgets 360 had exclusively reported earlier this week. In addition, the variant launched in India comes with 3GB of RAM, also in line with our earlier report. The phone will be available for purchase through Amazon and Flipkart as well as offline retail stores starting Saturday. The smartphone comes in Black and Gold colour options. To recall, the smartphone was launched in China late last month.

The Chinese smartphone manufacturer has designed the A83 with its UFOs (UFO Curve Design Philosophy). Also, the new Oppo smartphone has a full-screen display with thin bezels and comes preloaded with the company's AI Beauty Recognition technology that uses artificial intelligence (AI) efforts to enhance selfies and group shots. The proprietary technology is touted to capture more than 200 facial points to refine features and compose the face contour with precision.

The dual-SIM (Nano) Oppo A83 runs Android 7.1 Nougat-based ColorOS 3.2 and features a 5.7-inch HD+ (720x1440 pixels) LCD panel with 18:9 aspect ratio. Under the hood, the smartphone has an octa-core processor, which is a MediaTek MT6763T SoC clocked at 2.5GHz, coupled with 3GB of RAM in India, and not 4GB as in China. The smartphone has a 13-megapixel camera sensor on the back with an LED flash and an 8-megapixel front camera sensor. The rear camera sensor also supports Ultra-HD mode that can create an image of 50-megapixel resolution. Similarly, the front camera sensor enables face unlocking, just as what is available on various existing Oppo and Vivo models.

In terms of connectivity, the Oppo A83 has 4G VoLTE, Wi-Fi 802.11 a/b/g/n, Bluetooth v4.2, GPS/ A-GPS, Micro-USB, and a 3.5mm headphone jack. The smartphone also comes with a pre-installed O-Share file-sharing app that is claimed to transmit six to seven photos in just a second.

The Oppo A83 has 32GB onboard storage that is expandable via microSD card (up to 256GB). Sensors on board include ambient light, accelerometer, and proximity. The smartphone packs a 3180mAh battery and weighs 143 grams.

"With the A83 we wish to bring an affordable selfie camera with advance features such as the HD+ full-screen display and AI Beauty Technology. The A83 truly represents our ambition to continue being the Selfie Expert and Leader in the market," said Will Yang, Brand Director, Oppo India, in a press statement.