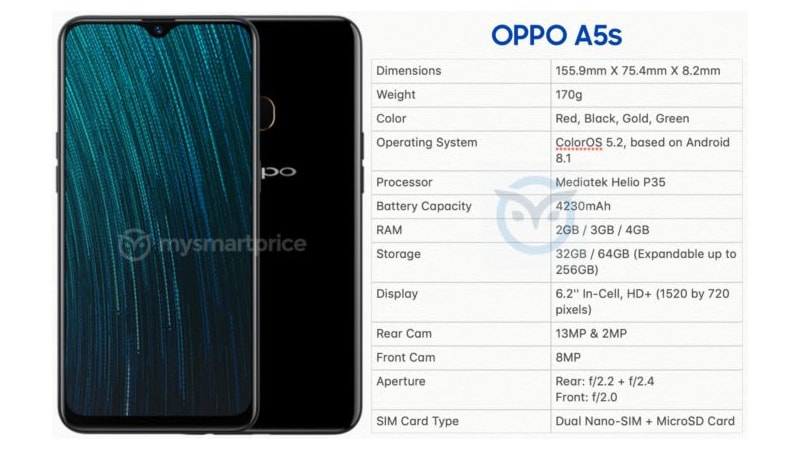 Oppo's budget A series is about to get a new member in the form of the A5s, if a recent report is to be believed. This will be the successor to the Oppo A3s and also a slightly refreshed version of the Oppo A5. A new leak claims to show what the phone will look like and tips some of its main specifications.

Indian technology website MySmartPrice has managed to get its hands on an alleged leaked Oppo A5s render, and also tip the the main Oppo A5s specifications. The phone is reported to have an updated design compared to the existing Oppo A5, as it gets a waterdrop notch, thereby giving it more screen-to-body ratio. The image also reveals that the phone will have a fingerprint sensor on the back. The Oppo A5s is a refreshed version of the Oppo A5, which launched in India last August.

As for specifications, the Oppo A5s is tipped to measure roughly 8.2mm thickness and will weigh around 170 grams. It will also be available in Red, Black, Gold, and Green trims, although we'll have to wait and see which colours actually make it to India. The phone is powered by a MediaTek Helio P35 octa-core SoC and will come in multiple RAM variants such as 2GB, 3GB and 4GB. Inbuilt storage is either 32GB or 64GB, and it will be expandable via a dedicated microSD card slot.

Just like the Oppo A5, the Oppo A5s is reported to have a 6.2-inch HD+ (720x1520 pixels) resolution display, although there's no mention if it will come with any sort of scratch protection such as Gorilla Glass. Around the back, the Oppo A5s appears to have a two-camera setup — one 13-megapixel primary sensor with an f/2.2 aperture and a 2-megapixel depth sensor with an f/2.4 aperture. It has an 8-megapixel front camera with a f/2.0 aperture. The phone is backed by a 4,230mAh battery. According to the leak, the phone will unfortunately not run ColorOS 6.0 out-of-the-box. Instead, it will have ColorOS 5.2 which is based on Android 8.2 Oreo.

We don't have a hint at a launch date yet, so we guess we'll just have to wait and see when Oppo decides to launch this one.