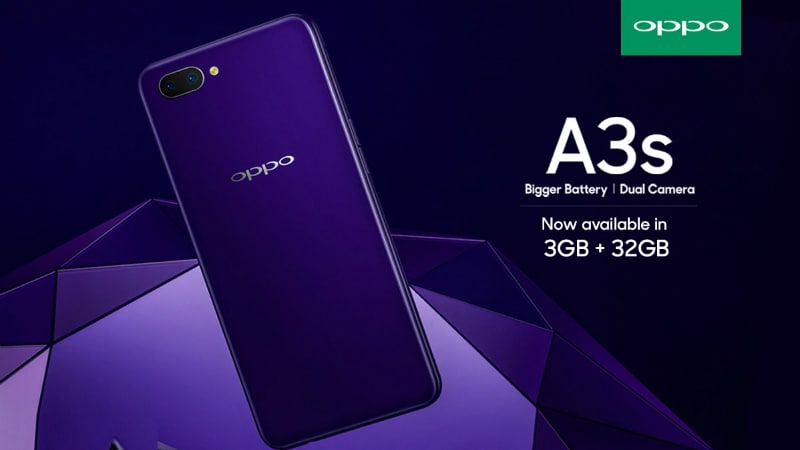 Oppo A3s has received a new variant in India that comes with 3GB of RAM and 32GB of inbuilt storage. While the listing hasn't gone live yet, Gadgets 360 has learnt that the Oppo A3s 3GB RAM price in India is Rs. 13,990. To recall, the Oppo A3s was launched in India last month in a single 2GB RAM/ 16GB storage model. Available in Dark Purple and Red colour variants, the Oppo A3s' key features include a tall 6.2-inch HD+ display, dual rear cameras, and a large 4,230mAh battery under the hood. The smartphone is sold in India via Flipkart, Amazon.in, Paytm Mall, and multiple offline stores.

The company's Indian division took to Twitter on Thursday to announce the arrival of the premium variant of the Oppo A3s. Availability details have not yet been revealed, however, the upgraded configuration has been listed on Oppo India's official website. The Oppo A3s 2GB RAM model price in India is Rs. 10,990.

In terms of optics, the Oppo A3s bears a dual rear camera setup that consists of a 13-megapixel primary sensor and a 2-megapixel secondary sensor, coupled with an LED flash. For selfies and video calling, the mid-range smartphone comes with an 8-megapixel sensor which has support for AI Beauty technology 2.0. Connectivity options include 4G LTE, Wi-Fi, Bluetooth v4.2, GPS, FM radio, and Micro-USB. Sensors onboard the smartphone include accelerometer, ambient light sensor, electronic compass, gyroscope, and proximity sensor. It comes with Face Unlock capabilities. The Oppo A3s measures 156.2x75.6x8.2mm and weighs 168 grams.