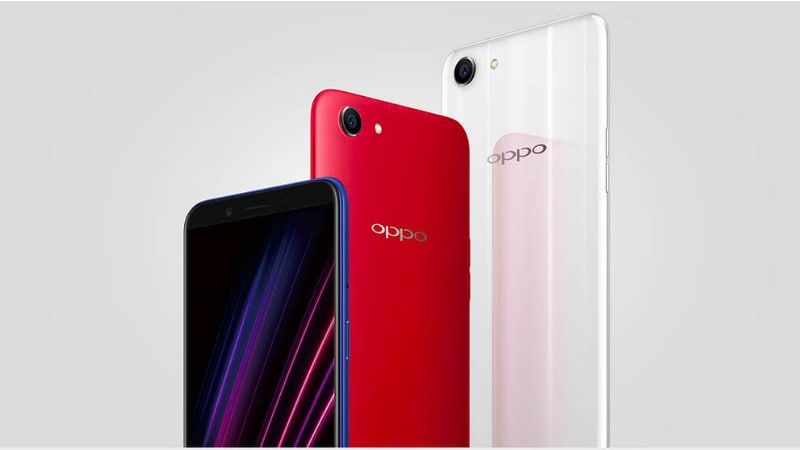 Chinese phone maker Oppo Mobiles has quietly listed the latest Oppo A1 smartphone in its home country. Oddly enough, the handset does not have a fingerprint sensor but does feature face recognition technology. Apart from that, the phone packs in modest specifications and bears a single camera sensor on the back. According to the company's official website, the Oppo A1 has been priced at CNY 1,399 (roughly Rs. 14,400) unlocked, or CNY 1,499 (roughly Rs. 15,400) with a Netcom connection. The phone has been launched in Blue, Red, and White (not yet listed) colour variants and will be available for purchase starting April 1.

The Oppo A1 sports a 5.7-inch HD+ (720x1440) S-IPS display with an 18:9 aspect ratio. The phone is powered by an unnamed SoC, coupled with 4GB of RAM and 64GB of inbuilt storage. There is a 3180mAh battery under the hood. In terms of camera specifications, the handset comes with a single 13-megapixel sensor on the back - with autofocus and LED flash - and an 8-megapixel selfie sensor with Beauty Mode.

Face recognition on the Oppo A1 is claimed to capture 128 unique facial features to provide accurate unlocking capabilities whenever the user raises the phone up to their face. Additionally, the Oppo A1 has a gaming acceleration mode that allows the smartphone to optimise memory usage even when 10 games are simultaneously running in the background. The absence of a fingerprint sensor is somewhat questionable with Oppo having gone the iPhone X route.

Later this month, the Oppo F7 is set to make an appearance in the Indian market at its launch event on March 27. The phone will sport an iPhone X-like notch and mid-range specifications. The Chinese phone maker has roped in Indian cricketers like Rohit Sharma, Hardik Pandya, and Ravichandran Ashwin for the event.

AT&T Will Use Time Warner as 'Weapon' if Merger Goes Ahead: US DoJ
Instagram Feed Algorithm Refreshed to Show More Posts Closer to Chronological Order