OnePlus Pixel Spotted on Geekbench Ahead of OnePlus 3T Launch 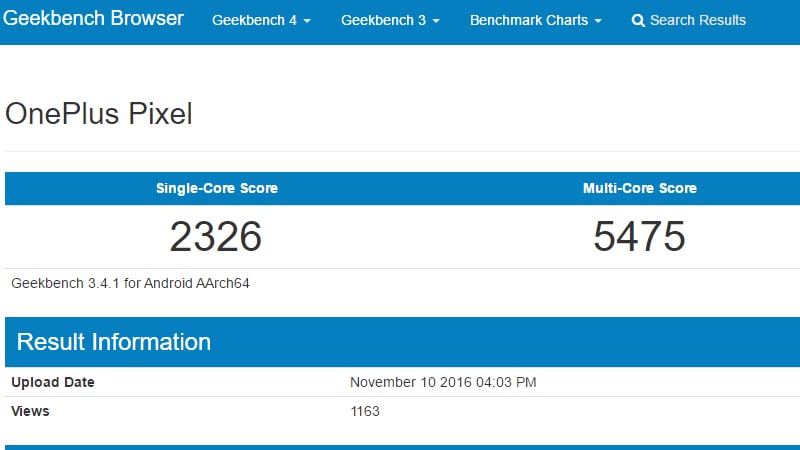 OnePlus had confirmed earlier that it would focus on its flagships solely, and will not indulge in making other smartphones alongside. However, the company has announced a smartphone launch on November 15, and a fresh Geekbench listing now hints at yet another OnePlus smartphone in the works.

A certain 'OnePlus Pixel' Geekbench score has been spotted, revealing specifications as well. The Geekbench listing reveals that the OnePlus Pixel sports what appears to be a Snapdragon 820 processor paired with 6GB of RAM. This is not in line with the rumoured OnePlus 3T that is largely expected to launch on Tuesday.

In any case, the OnePlus 3T has been confirmed to run on a Snapdragon 821 processor - the current latest from Qualcomm. Therefore, the mysterious OnePlus Pixel cropping up on Geekbench could be a separate smartphone altogether. OnePlus could also just be testing the OnePlus 4 smartphone scheduled for next year with current Snapdragon 820 processor, as the rumoured Snapdragon 830 processor has still not been officially launched. All of this is just speculation, and should be taken lightly.

For now, OnePlus is hosting a live event on its official Facebook page at 1pm EST (11.30pm IST) on Tuesday. At the event, the company is largely expected to unveil the much rumoured OnePlus 3T smartphone. The OnePlus 3T is said to be the refined version of the OnePlus 3 flagship launched earlier in June. Apart from the processor upgrade, the new variant will also have the latest Sony IMX398 sensor on board. It is expected to run on Android 7.0 Nougat-based OxygenOS, and sport an Optic AMOLED display.