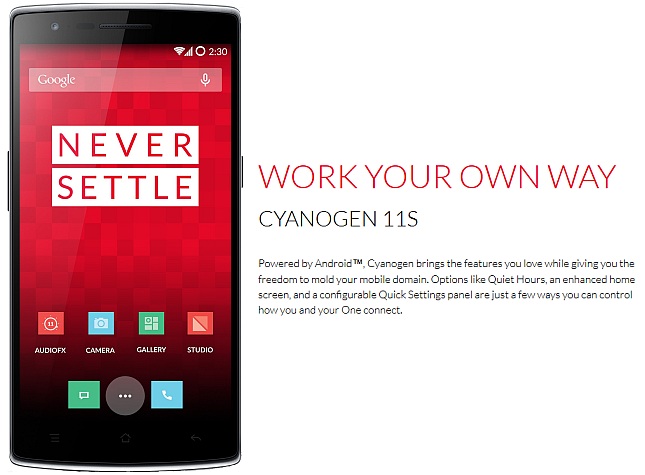 Cyanogen on Thursday announced its exclusive Cyanogen OS partnership with Micromax in India with the domestic manufacturer's new YU brand of smartphones. While this news doesn't really come as a surprise, its implications to the OnePlus-Cyanogen deal in India are the real news.

The Cyanogen press statement on Thursday read, "Micromax has announced a new Internet brand YU, which is slated to announce its first device on Cyanogen OS. Cyanogen's exclusive deal also means that Cyanogen OS will not support any other devices shipping in India with future updates including Lollipop."

OnePlus Director and Co-Founder Carl Pei on Friday explains in a heartfelt blog post that while the launch of the OnePlus One in India on Tuesday will not be affected, the smartphone will not receive updates to its custom-build of Cyanogen OS.

"It was surprising and disappointing to hear from Cyanogen on November 26 that they had granted exclusive rights in India over the Cyanogen system to another company. It is truly unfortunate that a commitment we both made to our Indian users will now not be upheld," said Pei.

The news is especially ironic because OnePlus' motto is "Never Settle". Pei clarifies that OnePlus had always planned to build its own custom software for its smartphones, but that Cyanogen's announcement has made it shift its engineering efforts towards its Android team, which will push out a community build based on Android 5.0 Lollipop in December, and a production-ready build by February.

"Our system will be based on Lollipop, and will be built to be stable, fast, and lightweight. True to our original promise of putting user experience first, it will be bloatware-free and only carry the features important to our users," says Pei.

As for global users, Pei said, "The One will continue to be supported globally and receive frequent OTAs. In fact, the next update will pack some surprises with which we think you'll be very happy. Cyanogen has unequivocally committed to continuing this global support and we look forward to working with them for another year on continuously improving our device."