OnePlus One to be Available in India Without Invitation on Tuesday 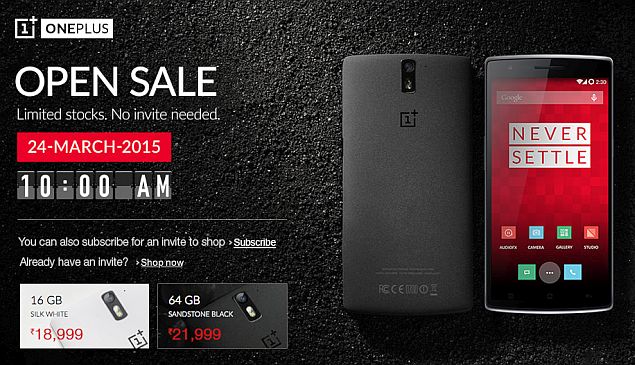 OnePlus One 'flagship killer' smartphone will be available to buy without any invites in India on Tuesday. The second open sale for the OnePlus One smartphone in India will kick off at 10am IST on Tuesday via Amazon. The company announced the news on Facebook.

An open sale for the One smartphone means that consumers will not require any invite to purchase the handset during the sale. The Chinese company has not revealed the number of units that will be up for sale on Tuesday; which means the the handset will be available to purchase without invite till stocks last. Last month, the OnePlus One smartphone went up for sale in its first open sale in the country.

The open sale for the OnePlus One on Tuesday might be the last sale without invite before the company announces revised pricing for the India market. OnePlus last week hinted the prices may be revised soon.

Considering that OnePlus has already hiked pricing of its "2014 flagship killer" smartphone, the One, for EU regions citing the decline in value of the Euro, we can expect a slight hike in pricing of the handset in India as well.

Earlier this month Apple decided to hike the maximum retail price of the entire iPhone range in India. Though, Apple did not make an official statement, industry observers attribute the move to the changes introduced in the union budget.

No Amazon? No Problem for Pakistan's E-Commerce Pioneers
Spectrum Auction Continues, Upfront Payments Could be Pushed to FY16