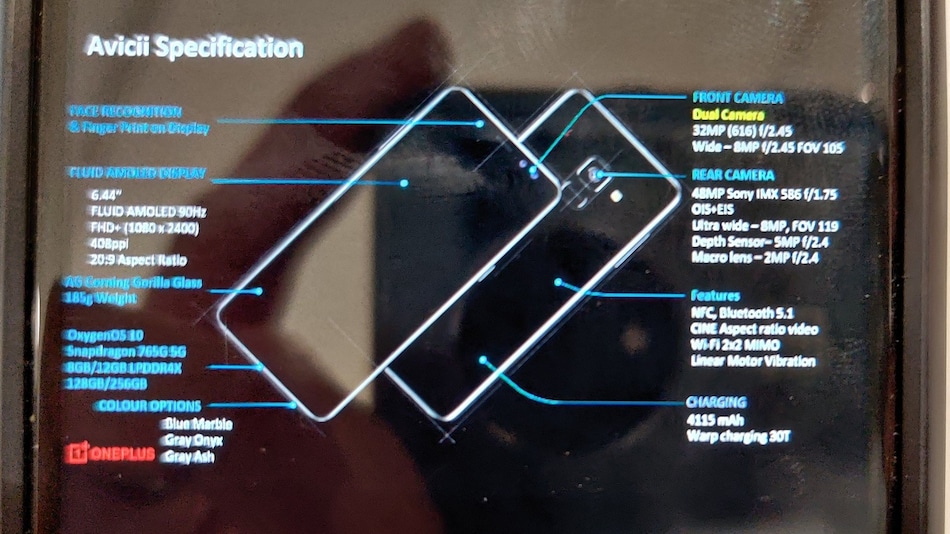 OnePlus Nord may come with a 4,115mAh battery

OnePlus Nord specifications have reportedly been leaked ahead of the July 21 launch event for the phone, according to a report. The promo video recently shared by OnePlus showed the dual-selfie camera and a glimpse at the rear camera setup of the OnePlus Nord, but this new leak offers details on the cameras, as well as other specifications of the phone. It is said to feature a 6.44-inch display and to come in three colour variants. OnePlus Nord will be unveiled on July 21 so we don't have to wait for too long to get confirmation on the specifications.

As per a tweet by well-known tipster Evan Blass, the image showing off the specifications of the OnePlus Nord is said to have come from the virtual Nord training presentation. It lists the colour options as Blue Marble, Grey Ash, and Grey Onyx.

The phone is said to run OxygenOS 10 and may feature a 6.44-inch full-HD+ (1,080x2,400 pixels) Fluid AMOLED display with a 90Hz refresh rate, 408ppi pixel density, and 20:9 aspect ratio. It is said to have Corning Gorilla Glass protection. The processor, Snapdragon 765G 5G that has been previously confirmed by OnePlus, is mentioned in the latest leak as well. The OnePlus Nord is rumoured to come in two variants namely, 8GB RAM and 128GB, and 12GB RAM and 256GB, and the image states that the phone will use LPDDR4X RAM.

The upcoming phone may be backed by a 4,115mAh battery with support for Warp Charge 30T and connectivity options include Wi-Fi 2X2 MIMO, Bluetooth v5.1, NFC, as well as an in-display fingerprint scanner. The phone is said to weigh 185 grams.

OnePlus had recently confirmed the presence of an AMOLED display and OIS support through Instagram posts and the dual selfie cameras through a teaser video. The OnePlus Nord will be unveiled on July 21 with pre-orders starting from July 15.