OnePlus has promised to provide a replacement to the affected OnePlus Nord 2 5G user. 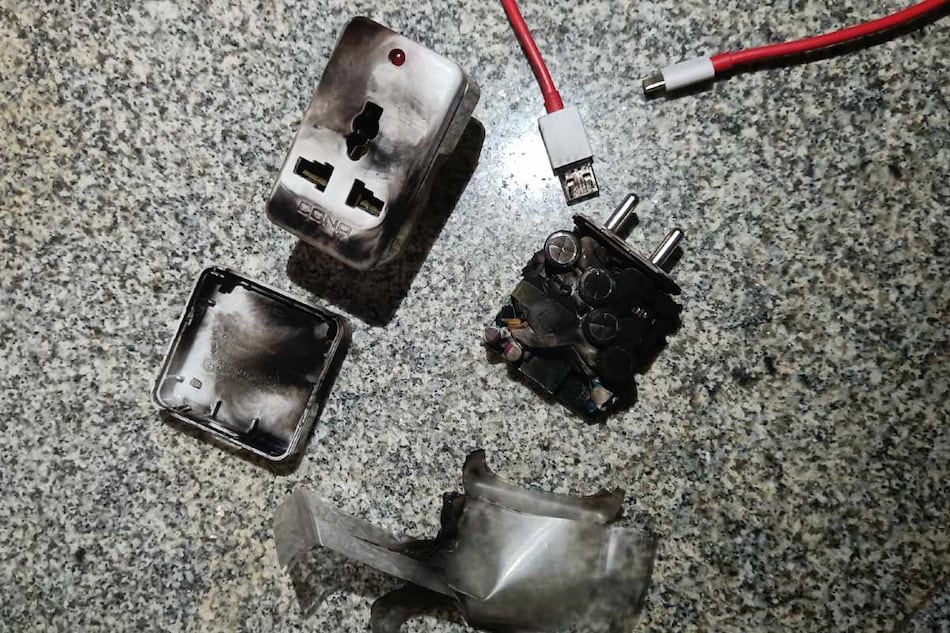 OnePlus Nord 2 5G charger allegedly exploded when it was connected to a socket for charging the phone. The incident is said to have taken place in Bengaluru on Saturday and was brought to public notice through a Twitter thread posted by the affected user. OnePlus acknowledged the explosion but said that the blast had been caused due to external factors including voltage fluctuations. Gadgets 360 reached out to OnePlus to learn what steps were being taken at 10am, but did not receive an update right away. At 1pm, the user however tweeted that the company has calling him and assured a replacement charger will be sent.

Jimmy Jose, a software engineer based in Bengaluru, reported on Twitter that the bundled charger of his OnePlus Nord 2 5G exploded all of a sudden. The explosion allegedly resulted in a “huge sound” and “blew up” the socket to which it was connected. The OnePlus Nord 2 5G phone was still working, according to the user.

The affected user tagged the OnePlus Support team that asked him to visit a customer care centre. One of the executives at the centre told the user that the incident happened due to voltage fluctuation, the user said.

After examining the charger, the service centre also promised to provide its replacement, though Jose tweeted on Tuesday to suggest that he didn't receive that. OnePlus, however, reached out to the user hours later.

Update: (continued)
When asked about the safety, he told me that it won't do any harm. He gave me an example that even if a large transformer we see with electricity boards, explodes, nothing will happen to anyone.
"It's not a blast. There's nothing in the charger to blast"

“We take any claim like this very seriously. The user has handed over the damaged OnePlus Charger to our service centre and has been offered a replacement,” the company said in a prepared statement emailed to Gadgets 360. “OnePlus chargers contain built-in capacitors which control and store energy. In this case, after a thorough analysis, the capacitors have remained intact concluding that the blast has been caused by external factors such as voltage fluctuations.”

The statement added that OnePlus strongly urges users to follow safety precautions and warnings specified in its user manual.

Earlier this month, a Delhi-based advocate had alleged that a OnePlus Nord 2 5G exploded in his gown. OnePlus said that it wasn't able to perform a “proper diagnosis” as the user refused to give them the device. The company later sent a legal notice to the user for giving “self-contradictory and false statements” with a “malicious and mala fide intent” to harm its reputation.

Another OnePlus Nord 2 5G had allegedly exploded last month — just days after it was purchased. The company in that particular case said that the damage to the device appeared to be “caused by an isolated incident involving external factors and not due to any manufacturing or product issue” after initiating a thorough internal investigation.

The OnePlus Nord 2 5G was launched in July as the successor to last year's OnePlus Nord. The phone comes with a MediaTek Dimensity 1200-AI SoC and packs a 4,500mAh battery that supports fast charging through the bundled Warp Charge 65 charger.

Update: A sentence was updated to provide additional clarity of the timeline of the complaint and the response from OnePlus.