A new OnePlus BE2028 has been spotted on Geekbench with 6GB RAM on board. 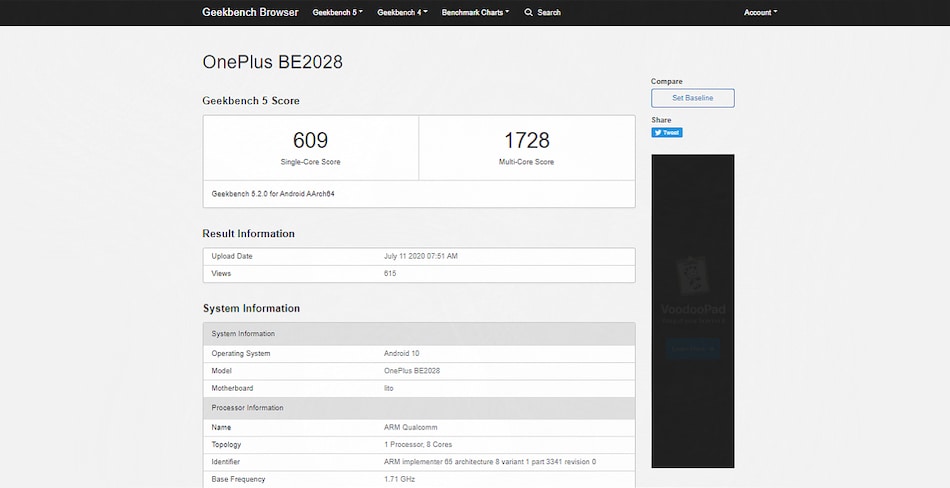 OnePlus Nord is slated to launch in India on July 21

OnePlus Nord Lite could have made an appearance via a benchmarking site. A new OnePlus phone has been spotted on Geekbench with a mid-range Qualcomm Snapdragon chipset, hinting at the possibility of a new OnePlus Nord variant. This new model has been listed on the benchmarking site with the model number ‘OnePlus BE2028'. The OnePlus Nord has previously been spotted on Geekbench with the model number AC2003. This new OnePlus mid-range device is listed to be powered by the ‘lito processor, which is commonly used for the Snapdragon 765 SoC range. However, the base CPU frequency and identifier details in this new Geekbench listing suggest that the OnePlus BE2023 model may be powered by the Snapdragon 690 SoC.

As mentioned, the new Geekbench listing comes with the model number OnePlus BE2028 and it suggests that the phone will run on Android 10, and pack 6GB of RAM. Qualcomm announced the Snapdragon 690 SoC last month, and it is the first SoC in the Snapdragon 600 series to support 5G. It features eight Kryo 560 CPU cores running at up to 1.7GHz, similar to what has been spotted on the new Geekbench spotting.

This new OnePlus phone could possibly the OnePlus Nord Lite model. OnePlus has made no hint of a OnePlus Nord variant in the offing and so this speculation should be taken with a pinch of salt. Also, OnePlus may be working on a ‘lighter' variant, but may launch it later and not alongside the OnePlus Nord on July 21.

Of course, this could also just be an early version of OnePlus Nord that was put for testing with slightly lower specifications. It could alternatively also be a completely different model that OnePlus is working on, outside of the Nord series. Little clarity is attained on this so far, and all we can do is speculate at the moment.

The OnePlus Nord has been spotted on Geekbench with the model number AC2003 in the past. It is listed to come with 12GB RAM and a Snapdragon 765 SoC with frequency at 1.8GHz. The phone is confirmed to launch in India on July 21. Amazon India is selling the OnePlus Nord AR Launch Invite with a price tag of Rs. 99. All buyers will need also to download the OnePlus Nord AR app from Apple App Store or Google Play to attend the virtual launch.