OnePlus 9 series launch will take place through a virtual event at 10am EDT (7:30pm IST) on March 23. 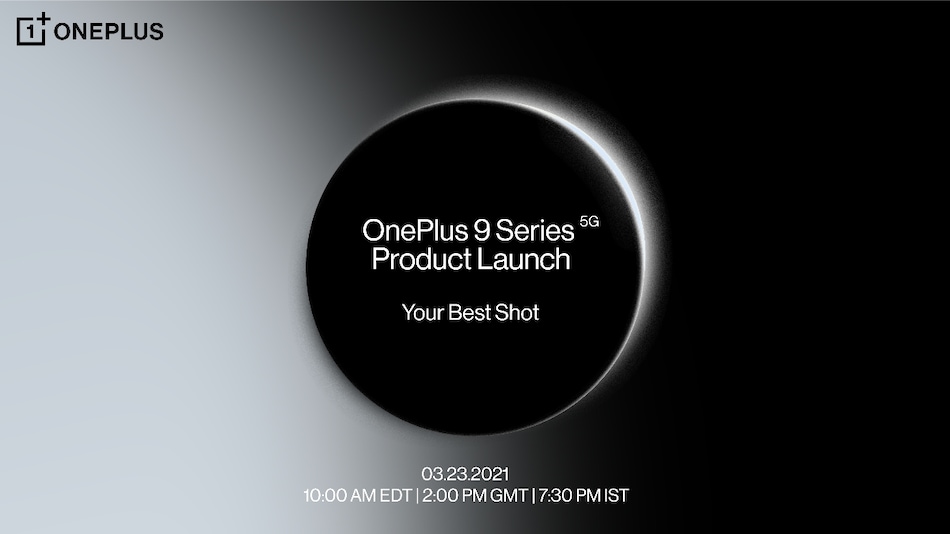 OnePlus 9 series launch date is March 23, OnePlus confirmed on Monday, corroborating an earlier report. The new flagship smartphone series by the Chinese company is rumoured to have three models, namely the regular OnePlus 9, the top-end OnePlus 9 Pro, and the affordable OnePlus 9e, which was previously rumoured to be called the OnePlus 9R. OnePlus also announced its partnership with camera manufacturer Hasselblad to deliver an enhanced camera experience on the OnePlus 9 series. The Shenzhen-based company also promised to invest $150 million (roughly Rs. 1,094 crores) for improving cameras on its phones over the next three years.

The OnePlus 9 series launch will take place through a virtual event at 10am EDT (7:30pm IST) on March 23. The event will be livestreamed through the OnePlus website. The launch date was also tipped last week.

OnePlus has announced its partnership with Hasselblad to revamp the camera system on the OnePlus 9 series.

“With OnePlus' top-of-the-line hardware and computational photography and Hasselblad's rich aesthetic knowledge in traditional photography, I am confident that the OnePlus 9 Series will be a major leap forward in our ability to deliver a premium, flagship camera,” said Pete Lau, Founder and CEO of OnePlus, in a prepared statement.

OnePlus and Hasselblad will work together over the next three years. The companies will start their collaboration by bringing software improvements including colour tuning and sensor calibration. The partnership will be extended to more dimensions in the future, OnePlus said in the statement.

The first product of the collaboration is an advanced colour calibration that is called Natural Color Calibration with Hasselblad. It is claimed to bring more perceptually accurate and natural-looking colours to photos taken with the OnePlus flagship phones. There will also be a new Hasselblad Pro Mode that will include Hasselblad's sensor calibration for more accurate and natural colour reproduction. The Pro Mode will bring the ability to adjust ISO, focus, exposure times, and white balance, among others. It will also support 12-bit RAW format.

“By partnering with OnePlus, we hope to put Hasselblad's iconic design and outstanding image quality in the hands of more people and share our passion for incredible photography,” said Jon Diele, Vice President, Hasselblad.

OnePlus has committed to invest $150 million under its three-year strategy to improve and enhance camera experience on its smartphones. The company says that it will develop its four major research and development labs around the world, including two imaging labs based in the US and Japan. OnePlus says the investment will also enable it to enter new areas of smartphone imaging, such a panoramic camera with a 140-degree field of view, T-lens technology for fast focusing through the front camera, and a freeform lens to eliminate edge distortion in ultra-wide photos. The freeform lens technology will be introduced on the OnePlus 9 series.

In terms of optics, the OnePlus 9 series will feature a custom Sony IMX789 sensor and 12-bit RAW support, the company has revealed. The new smartphone series will also bring improved HDR video recording in 4K at 120FPS and 8K at 30FPS.

Separately, tipster Vaibhav Jain, who runs YouTube channel TechDroider, has posted an image that purportedly shows the OnePlus 9 Pro in a “Stellar Black” colour option, with a textured finish. OnePlus had offered Sandstone Black on the OnePlus One and OnePlus 2. However, it is unclear whether the company is bringing back the same look and feel this time.

The OnePlus 9 series is also confirmed to have an in-box charger. While replying to a comment on the OnePlus forums, Lau said that the new series would indeed have a charger inside the box. This is unlike Apple and Samsung, smartphone market leaders that recently decided to stop bundling a charger with their flagships.

Alongside the OnePlus 9 series, OnePlus is expected to unveil its anticipated smartwatch that could be called the OnePlus Watch. Both the phones and the smartwatch are expected to debut in markets including India shortly after their launch.