OnePlus 8T May Have Been Spotted on Geekbench, Shows 8GB RAM, Snapdragon 865 SoC

OnePlus 8T series is expected to be the next smartphone by the company, as it traditionally launches a T series phone in the last quarter of the year. 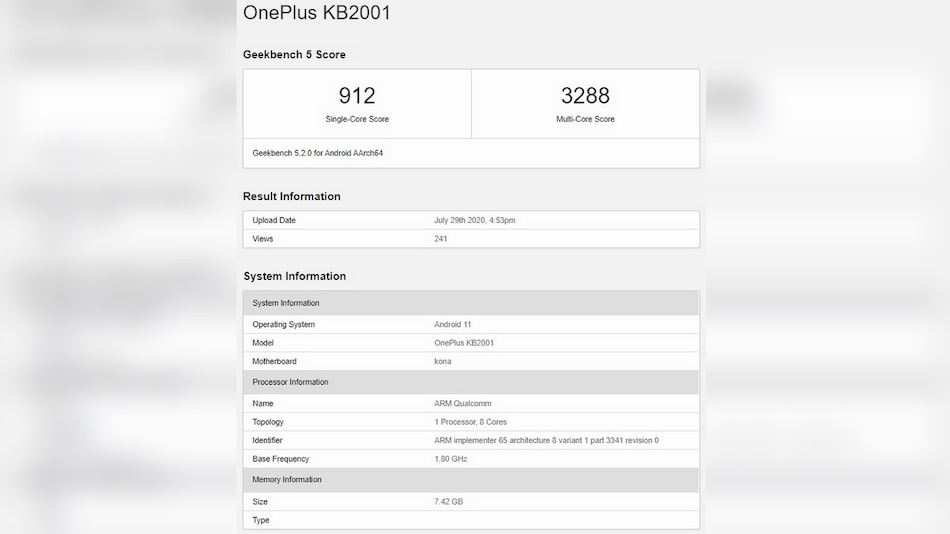 OnePlus 8T or OnePlus 8T Pro may have shown up on Geekbench benchmarking website. The Chinese company has a tradition of releasing ‘T versions' of its flagships in about 6 months and has been doing so since the OnePlus 3. Having recently announced the more budget friendly OnePlus Nord, seems like the company is back on its flagship train. The Geekbench listing comes with the model number OnePlus KB2001 and hints at the processor, RAM, and Android version of the phone that is said to be either the OnePlus 8T or OnePlus 8T Pro.

Secondly, the mention of Android 11 even though Google has not released the stable version of it yet is also quite interesting. The final stable release of Android 11 is expected in Q3 this year which means it could be released by the end of next month or sometime in September. And, OnePlus usually releases the T versions of its smartphones around October and November so, the OnePlus 8T or OnePlus 8T Pro may come with Android 11 out-of-the-box.

The Geekbench listing was first spotted by Nashville Chatter and independently verified by Gadgets 360.