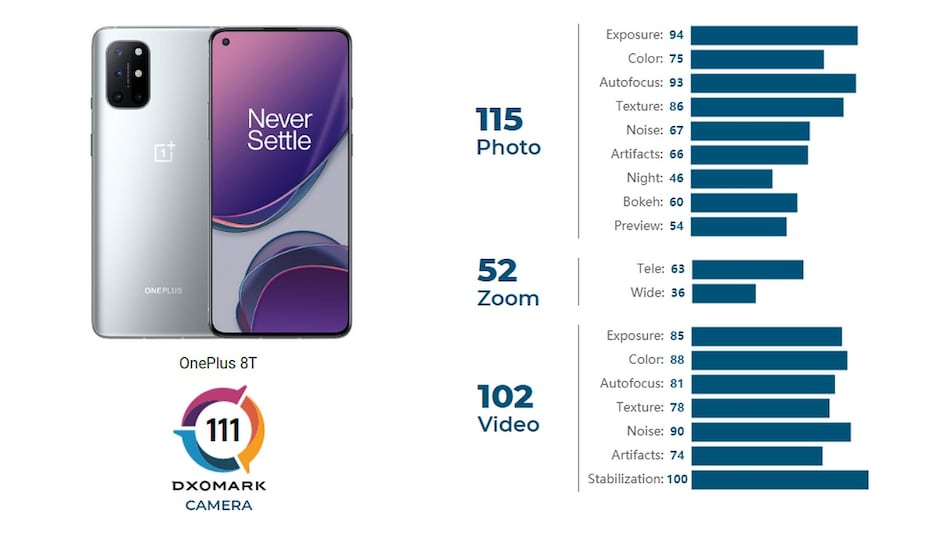 OnePlus 8T DxOMark camera test has fetched the flagship phone only an average score. DxOMark has a slew of tests designed to test specific performance points of a phone's camera, such as nighttime performance, zoom quality, video quality, dynamic range, and more. The OnePlus 8T scored 111 overall, which puts it in the lower half of DxOMark's camera rankings alongside the Sony Xperia 5 Mark II, the Google Pixel 4a, and the Huawei Mate 20 X. DxOMark also noted that low light camera performance of the OnePlus 8T is quite poor.

DxOMark says that colour rendering of the OnePlus 8T cameras is inaccurate in both photo and video modes under normal light, and the inaccuracy becomes even more pronounced in low light. According to DxOMark reviewers, the phone generally has limited dynamic range, and low light photos and videos come with a lot of noise. Medium- and long-range zoom shots are said to lose detail and add noise as well. The benchmarking site also found focus instabilities in low light with the OnePlus 8T cameras.

It's not all bad for the OnePlus 8T as the cameras offer good exposure in most conditions, a wide depth of field, and good bokeh performance, according to the test. When shooting under ideal lighting conditions, the video stabilisation is said to work well and there is low noise.

“Its camera's primary module is capable of delivering mostly pleasant images and video clips, as long as you stay away from low light,” says the DxOMark review.