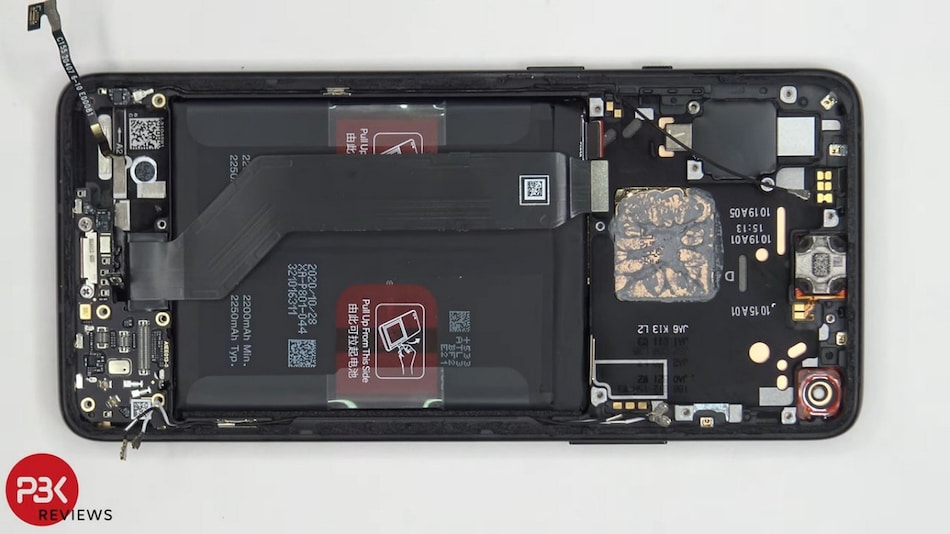 OnePlus 8T Cyberpunk 2077 Limited Edition has been put through a teardown process on YouTube. It shows the internals of the Cyberpunk 2077 Limited Edition of the phone are the same as the regular OnePlus 8T. The chipsets are covered with thermal paste and copper tape, and there is a graphite film on top. The large piece of glass that covers the top half of the back of the phone is purely for aesthetic purposes. The actual camera module is the same as the regular OnePlus 8T.

The teardown video shared by PBKreviews on YouTube shows a thick back plate on the OnePlus 8T Cyberpunk 2077 Limited Edition with a lamination layer on the inside that gives the feeling of a sandstone back but feels like glass to the touch. The top part of the back has a large glass area that is purely for aesthetics. Beyond these changes, the internals are identical to the regular OnePlus 8T.

The chips are covered with thermal paste, copper tape, and then with graphite tape. The OnePlus 8T Cyberpunk 2077 Limited Edition has a dual battery setup as it supports faster 65W charging speeds; the dual battery also helps with thermals. There is a 2,200mAh battery and a 2,250mAh battery in the phone. There is also a copper vapour chamber in the phone that extends under the battery.

The teardown video shows the cumbersome process remove one needs to go through to replace the display. The backplate will have to be removed first, followed by the bottom cover with the speaker assembly, and then the sub-board at the bottom, to get to the display cable.

Nokia Smart TV 75-Inch 4K UHD Model With Dolby Vision, HDR10 Launched
The Mandalorian Season 2 Episode 5 Recap: May the Force Be With You