OnePlus 8 Pro’s leaked image reveals a design that is unmistakably similar to the concept-based renders that recently surfaced online. 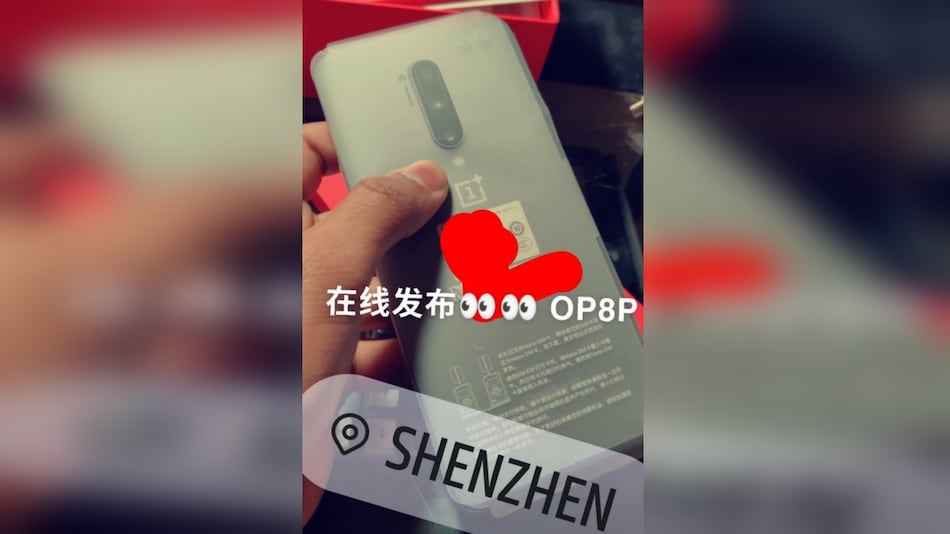 OnePlus 8 Pro is tipped to come with an IP68 rating

OnePlus 8 series is rumoured to debut in late March or April this year, a few weeks earlier than OnePlus' typical release cycle. OnePlus is tipped to shake things up a little bit this year by launching three phones – OnePlus 8, OnePlus 8 Pro, and OnePlus 8 Lite – all of which have appeared in concept-based renders so far. Now, the OnePlus 8 Pro has allegedly appeared for the first time in a live photo. Interestingly, the phone that has posed for the camera has an uncanny resemblance to the leaked OnePlus 8 Pro renders and design schematics we have seen so far.

The alleged OnePlus 8 Pro hands-on photo was spotted on Discord first and later shared on Twitter. The phone is seen wrapped in the protective, translucent sleeve found inside a new retail unit. Even though the colour of the alleged OnePlus 8 Pro's rear panel is not visible, one can still clearly the silhouette of the camera module and the rest of the hardware.

The alleged OnePlus 8 Pro image clearly shows a quad rear camera setup accompanied by an LED flash. Three of the lenses are stacked vertically in a pill-shaped module that creates a small bump, below which sits the LED flash. The fourth camera lens sits above what rumours says is a laser autofocus module. The aesthetics we see in the leaked image are almost identical to the alleged OnePlus 8 Pro design diagrams that surfaced back in November 2019, and the leak-based renders that popped up a month prior to that.

OnePlus 8 Pro is said to come with an IP68 rating for dust and water resistance. The upcoming OnePlus phone will reportedly be powered by the Snapdragon 865 SoC paired with a minimum of 8GB RAM, and it might go all the way up to 16GB. Other rumoured specifications of the phone include a 6.5-inch curved AMOLED display with a hole-punch and 120Hz refresh rate, and a 4,500mAh battery with support for 50W wired fast charging.