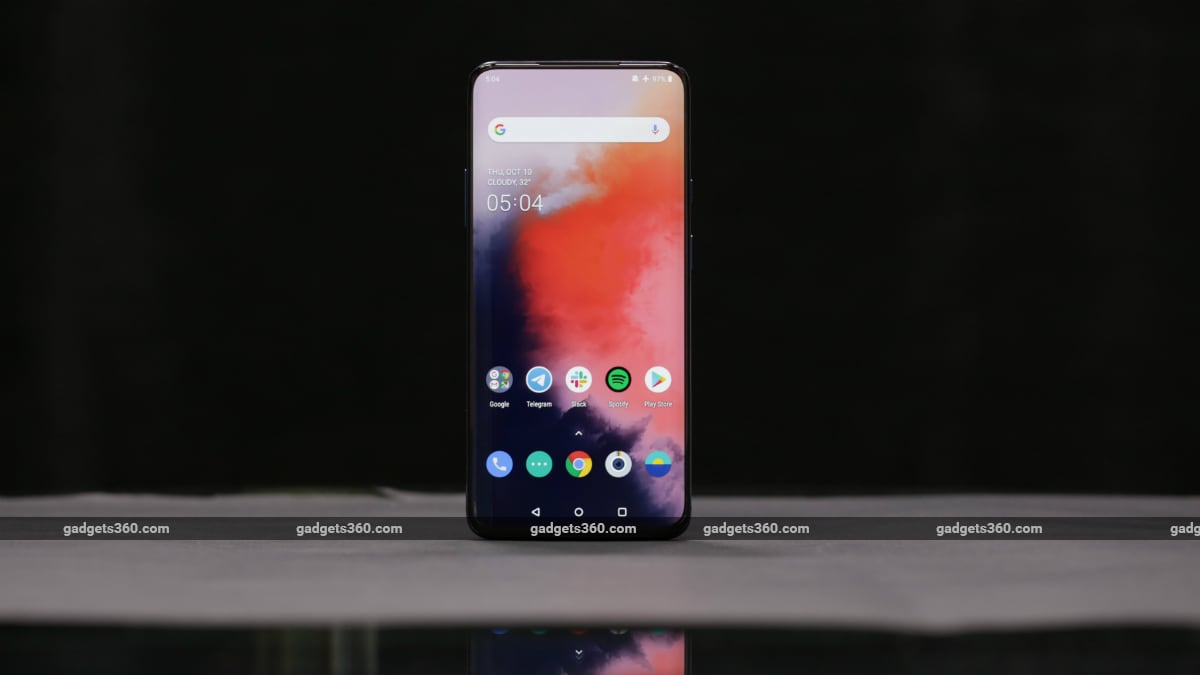 OnePlus 7T Pro is now official. After much anticipation and a series of teasers as well as rumours, the Shenzhen-based company has formally launched the OnePlus 7T Pro as its newest flagship. The new OnePlus phone comes with the legacy of the OnePlus 7 Pro that you would notice right from its first glimpse. The smartphone flaunts a pop-up selfie camera design and shows off an edge-to-edge display. As an upgrade, there is the Qualcomm Snapdragon 855+ SoC that enables an enhanced gaming experience. The OnePlus 7T Pro also runs Android 10 out-of-the-box -- along with the proprietary OxygenOS skin on top.

The OnePlus 7T Pro price in India is set at Rs. 53,999 for the lone 8GB RAM + 256GB storage variant. It will be available in an early access sale at 12pm IST on October 11 via OnePlus exclusive stores across 8 cities in India. Open sales will start from 12pm IST on October 12 via Amazon India and OnePlus retail channels. The OnePlus 7T Pro comes in single, Haze Blue colour option.

To recall, the OnePlus 7 Pro -- the predecessor to the OnePlus 7T Pro -- was launched in India back in May earlier this year with a starting price of Rs. 48,999 for the 6GB RAM + 128GB storage option.

Alongside the regular OnePlus 7T Pro, OnePlus has brought the OnePlus 7T Pro McLaren Edition that sports the iconic McLaren papaya orange features along with the all-new phone case that is designed with composite fabric material Alcantara. The phone comes in 12GB RAM + 256GB storage configuration with a price tag of Rs. 58,999 in India.

The design of the OnePlus 7T Pro is identical to the OnePlus 7 Pro -- with the same pop-up selfie camera, the same curved-edge AMOLED display, and even the same dimensions as well as weight. However, there are some notable changes. The new phone by default runs OxygenOS 10.0 based on Android 10 on top that brings upgraded Portrait Mode, Macro Mode, and Reading Mode among others. There is also the upgraded processor to deliver 15 percent faster rendering of graphics over the Snapdragon 855 SoC available on the OnePlus 7 Pro.

OnePlus claims that through OxygenOS 10.0, it offers 370 software-based optimisations to the OnePlus 7T Pro along with improved overall performance, animations, visuals, gestures, and unlocking speed. Further, the Laser AF sensor on the new phone has been repositioned at the back. The battery capacity has also been increased from the existing 4,000mAh to 4,085mAh. Likewise, the company says that it has improved the Warp Charge 30T charging technology to deliver faster results -- despite offering the same (wattage) 30W fast charging that we saw on the existing OnePlus 7 Pro.

For photos and videos, the OnePlus 7T Pro includes the triple rear camera setup that has a 48-megapixel Sony IMX586 primary sensor with an f/1.6 lens and optical image stabilisation (OIS) as well as electronic image stabilisation (EIS) support. The camera setup also features an 8-megapixel sensor with an f/2.4 telephoto lens and OIS support and a 16-megapixel sensor with an f/2.2 ultra-wide-angle lens that offers a field of view (FoV) of 117 degrees. Furthermore, there are features such as UltraShot, Nightscape, Portrait, Pro Mode, Panorama, HDR, AI Scene Detection, and RAW Image.

On the part of capturing selfies, the OnePlus 7T Pro comes with a 16-megapixel Sony IMX471 camera sensor that has a pixel size of one micron and includes an f/2.0 lens. The selfie camera works with preloaded features such as Face Unlock, HDR, Screen Flash, and Face Retouching.