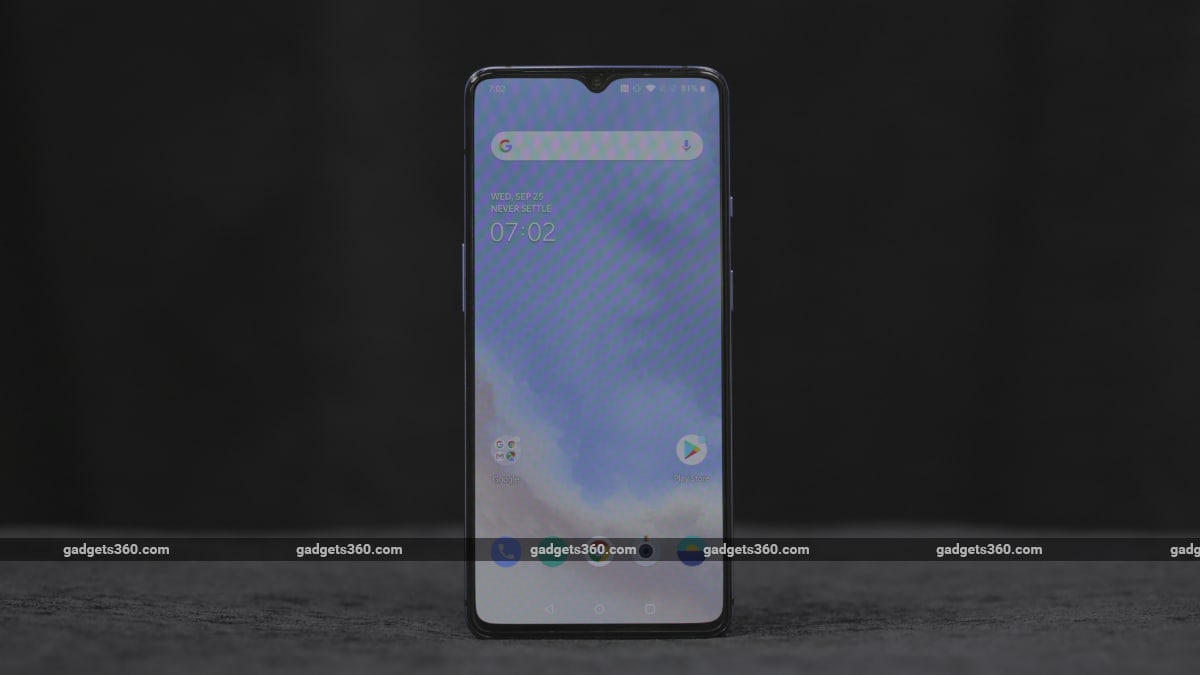 OnePlus 7T will be offered in two colour options

OnePlus 7T has been launched in India, and the new OnePlus smartphone comes with a higher capacity battery, faster processor, and an additional rear camera compared to its predecessor - the OnePlus 7. The OnePlus 7T also supports Warp Charge 30T that is touted to be 18 percent faster than Warp Charge 30 found on OnePlus 7 Pro. Key features on the phone include a 6.55-inch full-HD+ display with 90Hz refresh rate and a waterdrop-style notch, a 3,800mAh battery, a triple rear camera setup with a 48-megapixel main sensor, and the latest Qualcomm Snapdragon 855+ SoC.

The OnePlus 7T price in India starts at Rs. 37,999 for the 8GB + 128GB option, whereas its 8GB + 256GB variant will retail at Rs. 39,999. The smartphone will be offered in Frosted Silver and Glacier Blue colour options in a new matte frosted glass look. It will go on sale via Amazon India, OnePlus India website, and OnePlus Experience Stores starting September 28, which also coincides with the Amazon Great Indian Festival Sale. A new Olive Green colour variant of the OnePlus Bullets Wireless were also launched, at the same Rs. 5,990 price.

Launch offers for the OnePlus 7T weren't detailed at the time of launch, beyond naming channel partners - Airtel, Cashify, Croma, HDFC Bank, Poorvika, Poojara, Reliance Digital, Reliance Jio, Sangeetha, SBI, Top-10, and Vijay Sales. A pop-up event is being held on Thursday in these cities - Ahmedabad, Bengaluru, Chennai, Delhi, Hyderabad, Kolkata, Mumbai, and Pune. OnePlus at the event also announced OnePlus Care loyalty programme with benefits such as 1-year extended warranty, 50 percent off on battery replacement, as well as buyback offers. At the event, the company announced it would launch its own payments service - OnePlus Pay - sometime next year.

As for the specifications, the dual-SIM (Nano) OnePlus 7T runs on OxygenOS 10.0, based on Android 10. The OnePlus 7T sports a 6.55-inch full-HD+ (1080x2400 pixels) Fluid AMOLED display with a 20:9 aspect ratio, 90Hz refresh rate, HDR10+ support, a pixel density of 402ppi, a peak brightness of 1,000 nits, as well as support for sRGB and DCI-P3 colour gamuts. The display is also said to feature new tech to block 40 percent of blue light. It also bears Corning Gorilla Glass on both the front and back panels.

The OnePlus 7 had a 19.5:9 aspect ratio on its 6.41-inch, 60Hz, and HDR10+ display. The OnePlus 7T also gets a new Chromatic Reading Mode, and retains the Night Mode features that were present on OnePlus 7. It is powered by the octa-core Qualcomm Snapdragon 855+ SoC, coupled with the Adreno 640 GPU and up to 8GB of LPDDR4x RAM.

The OnePlus 7T features a triple rear camera setup, in a horizontal layout - compared to the dual rear camera in a vertical layout on the OnePlus 7. The OnePlus 7T setup consists of a 48-megapixel Sony IMX586 sensor as its primary camera, with an f/1.6 aperture, 1.6-micron pixels (4-in-1), optical image stabilisation (OIS), electronic image stabilisation (EIS), and phase detection autofocus (PDAF). The secondary camera features a 2x telephoto lens with a 12-megapixel sensor, an f/2.2 aperture, and 1.0-micron pixels. The third camera is an ultra-wide angle lens with a 16-megapixel sensor, an f/2.2 aperture, and 117-degree field of view. The rear camera setup is accompanied by a dual-LED flash module.

OnePlus 7T has a triple rear camera setup at the back

Up front, the OnePlus 7T bears the same 16-megapixel Sony IMX471 sensor as the OnePlus 7. The selfie camera sensor has 1-micron pixels, an f/2.0 aperture, and EIS. The company is touting features like HDR, Screen Flash, Face Retouching, and Time-Lapse.

The OnePlus 7T offers 128GB or 256GB UFS 3.0 2-lane storage. Just like previous OnePlus handsets, this new variant doesn't offer storage expansion. The company is touting new OnePlus Cloud Storage for the Gallery, with 5GB free. For the first year, users get an additional 50GB of storage. The Gallery has a new Smart Albums feature as well, that categorised based on identity and location. The process is said to be on-device.

Other OnePlus 7T features include dual stereo speakers (on the top and bottom of the phone), haptic vibration (seen on the OnePlus 7 Pro), gestures and on-screen navigation support, noise cancellation support, and Dolby Atmos support features. It also retains the iconic Alert Slider.