OnePlus 7 Pro release date in India is May 17, though Amazon Prime members get it a day earlier. 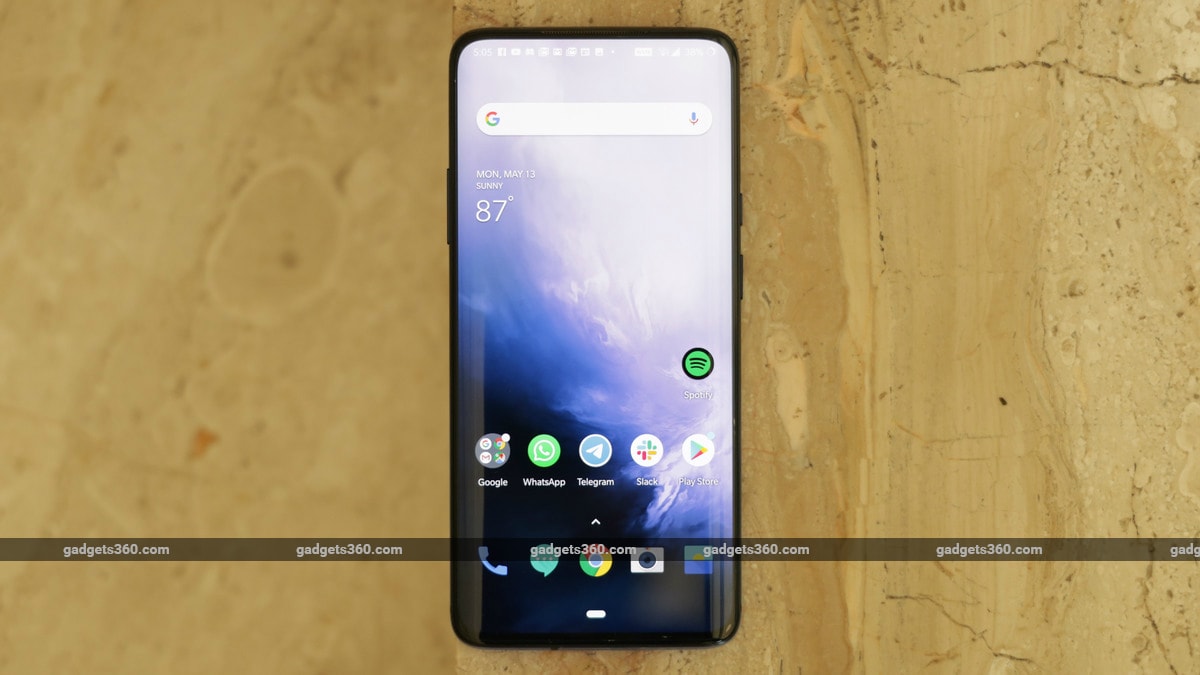 OnePlus 7 Pro was launched on Tuesday at three simultaneous events in Bengaluru, London, and New York. The new smartphone can be considered the OnePlus flagship for the year, with the OnePlus 7 was launched alongside positioned as the more affordable option. The Chinese smartphone manufacturer has made quite a few changes from its tradition with the OnePlus 7 Pro, not in the least being the display which for the first time in the company's history offers a QHD+ resolution and a 90Hz refresh rate. The OnePlus 7 Pro also has the largest battery of any OnePlus smartphone till date, with a 4,000mAh capacity, and the most RAM, with 12GB. Of course, it is also the first OnePlus smartphone with a pop-up selfie camera. It will be made available in Almond, Mirror Grey, and Nebula Blue colour options. Read on for more details about the OnePlus 7 Pro price, specifications, release date, and more.

It will be made available on day earlier for Amazon Prime customers in a Prime Early Access sale on May 16, as well as the OnePlus Early Birds Sale. Consumers can buy the OnePlus 7 Pro even earlier at OnePlus Pop-Up Stores in Ahmedabad, Bengaluru, Chennai, Delhi, Hyderabad, Mumbai, and Pune at 7pm on May 15, while a month-long Experience Pop-Up will be held in Delhi from May 17 to June 16. Launch offers include benefits worth Rs. 9,300 from Reliance Jio, up to 70 percent Guaranteed Exchange Value from Servify, and Rs. 2,000 cashback on SBI. The Almond colour will go on sale for the first time in June.

OnePlus 7 With Up to 8GB RAM, Snapdragon 855, 48-Megapixel Camera Launched

The dual-SIM (Nano) OnePlus 7 Pro runs OxygenOS based on Android 9.0 Pie, bringing new features like native Screen Recording and a Zen Mode that makes the phone available for use for 20 minutes, only allowing emergency calls and the use of the camera. As we mentioned, in a first for the company, the OnePlus 7 Pro features a Quad-HD+ resolution (1440x3120 pixels). The phone will get 2 years of software updates, and 3 years of security updates.

Always experience the latest Android has to offer on the #OnePlus7Pro pic.twitter.com/8nDjYOhhQy

The 6.67-inch Fluid AMOLED display has an aspect ratio of 19.5:9, a pixel density of 516ppi, a refresh rate of 90Hz, and support for sRGB and DCI-P3 colour gamuts. It also supports HDR10+ and Netflix HDR streaming. A Night Mode 2.0 has been introduced, delivering a lowest brightness setting of 0.27 nits. The display is protected by Corning Gorilla Glass 5, and the company claims it has received a A+ rating from DisplayMate. The smartphone is powered by the Qualcomm Snapdragon 855 SoC, coupled with the Adreno 640 GPU and up to 12GB of LPDDR4x RAM.

The OnePlus 7 Pro bears a triple rear camera setup, consisting of a 48-megapixel Sony IMX586 sensor as its primary camera, with an f/1.6 aperture, 1.6-micron pixels (4-in-1), optical image stabilisation (OIS), and electronic image stabilisation (EIS). The secondary camera features a 16-megapixel sensor with an f/2.4 aperture and an ultra wide-angle lens with a 117-degree field of view. Finally, an 8-megapixel camera rounds off the triple rear camera setup, with a telephoto lens capable of 3x optical zoom, an f/2.4 aperture, 1-micron pixels, and OIS.

The rear camera setup is accompanied by a dual-LED flash module, and it also supports phase detection autofocus (PDAF), laser autofocus (LAF), and contrast autofocus (CAF). The rear cameras can record 4K video at up to 60fps, 1080p video at up to 240fps, and 720p video at up to 480fps, with the last two being Super Slow Motion modes. The company is touting camera features like Portrait, UltraShot, Nightscape, Pro Mode, AI Scene Detection, Panorama, HDR, Studio Lighting, Time-Lapse, and RAW Image. At the launch event, the company said the OnePlus 7 Pro received an overall DxoMark score of 111.

For the front camera, OnePlus is using a pop-up camera on the OnePlus 7 Pro. It features a 16-megapixel Sony IMX471 sensor with 1-micron pixels, an f/2.0 aperture, and EIS. The company is touting features like HDR, Screen Flash, Face Retouching, and Time-Lapse. The pop-up camera's elevator mechanism has been tested over 300,000 times, which the company claims implies that if the camera is used 150 times a day, it will still work for over 5 years. The company adds that to better protect the camera, the OnePlus 7 Pro will automatically retract the extended module in a "fraction of a second" when the phone is falling, using the accelerometer and gyroscope sensors.

There are two storage configurations on the OnePlus 7 Pro, depending on the variant purchased, with 128GB and 256GB UFS 3.0 2-lane storage. The company claims this is the first globally available smartphone that uses this new faster storage standard. As with previous OnePlus handsets, there is no storage expansion via microSD card.

Connectivity options on the OnePlus 7 Pro include 4G VoLTE, Wi-Fi 802.11ac, Bluetooth v5.0, NFC, GPS/ A-GPS, and a USB Type-C (v3.1 Gen 1) port that also doubles as the headphone port. Sensors on board the OnePlus 7 Pro include an accelerometer, ambient light sensor, gyroscope, magnetometer, and a proximity sensor. The in-display fingerprint sensor is said to be faster than the one used on the OnePlus 6T, using a 3-element lens and a larger sensor, apart from utilising new algorithm. The OnePlus 7 Pro runs on a 4,000mAh battery, with Warp Charge 30 fast charging (5V/ 6A) that's said to be 38 percent faster than previous generations. Warp Charge 30 was first seen on the OnePlus 6T McLaren Edition.

The company is also touting the new X-haptic vibration motor on the smartphone, as well as its dual stereo speakers (on the top and bottom of the smartphone), noise cancellation support, and Dolby Atmos support. Like previous OnePlus handsets, the OnePlus 7 Pro retains the iconic Alert Slider. It has dimensions of 162.6x75.9x8.8mm, weighs 206 grams, and its back panel is constructed of Gorilla Glass 5. The OnePlus 7 Pro also boasts of a 10-layer liquid cooling system.