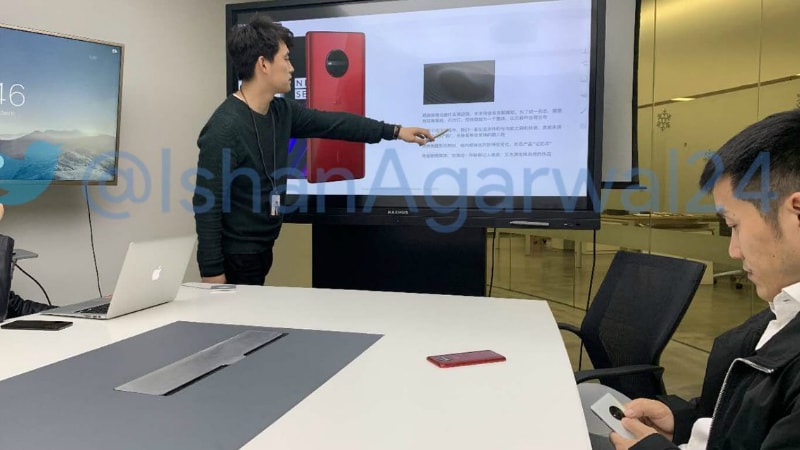 OnePlus is set to launch a 5G variant next year, and the smartphone appears to have been leaked in an image. The photo seems to be straight out of the boardroom where the executives are seen sitting and discussing the device. The OnePlus 5G is seen on the presentation slide, on the table, and in the hands of CEO Pete Lau as well. To recall, OnePlus has confirmed that the 5G phone will not be the OnePlus 6T successor, but rather be a completely different device with an expensive price tag attached to it. It may also be that the device in the image is the OnePlus 7, and not the OnePlus 5G smartphone. Time will tell.

This new image has been leaked by tipster Ishan Agarwal, and it gives us our first look of what the OnePlus 5G phone may look like. Agarwal notes smartphone is in its prototyping stage, and the final design may be something completely different. In any case, the image shows the back of the OnePlus smartphone in red on the slide, and what seems like a light silver colour option in the hands of CEO Pete Lau.

At the back, we can see a circular ring for the camera sensors, but we can't really make out the number of sensors placed inside the ring. Also, this back camera design is strikingly different than what we saw on the OnePlus 6T which has dual sensors stacked vertically at the back. Lau is seen holding the device in his hand, and it also has the same black circular ring as the one seen on the presentation slide.

It is important to reiterate that this is a prototype, and not the final design, and something completely different may be launched next year. The company has confirmed that the OnePlus 5G smartphone will be the first from the company to launch in UK in partnership with EE, and will be $200 to $300 costlier than the OnePlus 6T. Lau has also confirmed that this 5G device will be launched by the end of May 2019.