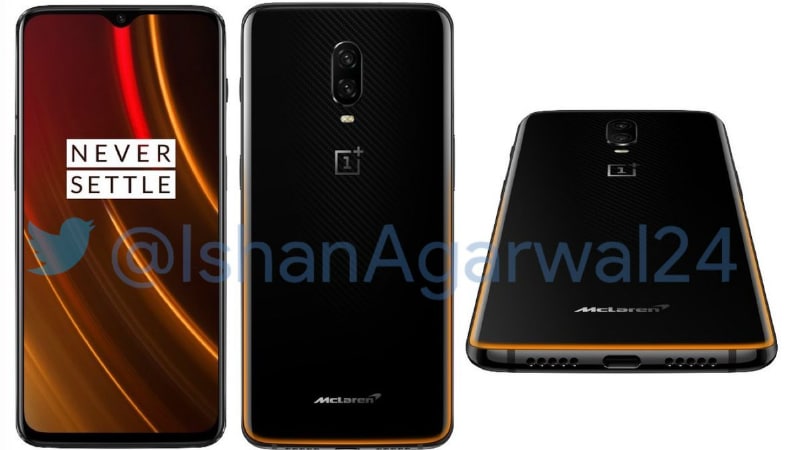 OnePlus 6T McLaren Edition is all set to witness an unveiling at the Chinese phone maker's launch event scheduled for December 12 in Mumbai. Just days before launch, a leak has emerged online that gives us a look at the phone's design as well as its specifications. According to the leak, the OnePlus 6T McLaren Edition smartphone will be launched next week with premium features including 10GB of RAM, Warp Charge fast charging technology, and a McLaren-inspired premium design with a logo of the automotive brand imprinted on the back panel.

A tweet by tipster Ishan Agarwal gives us a look at what are supposedly official renders of the upcoming OnePlus 6T McLaren Edition Speed Orange variant. The photos show the OnePlus 6T with a textured kevlar-style back and an orange accented band running across the phone's frame, symbolising McLaren's trademark orange colour scheme. A McLaren logo is seen on the bottom of the back panel. Apart from that, the aesthetics remain similar to those the regular models — including the waterdrop-style notch, dual rear camera setup, and the likes.

As per a leaked marketing banner of the upcoming variant, it is suggested to be OnePlus' first smartphone model with an astonishing 10GB of RAM. This will likely be coupled with 256GB of onboard storage. It is also expected to feature something called “Warp Charge 30” which will apparently offer a day's power in 20 minutes of charge. Lastly, the phone is said to come bearing “expert craftsmanship” inspired by McLaren's range of premium automobiles.

The OnePlus 6T McLaren Edition is now up for pre-registrations on Amazon India and users can hit the ‘Notify Me' button to get real-time updates around the smartphone model's launch. Passes for the OnePlus' ‘Salute to Speed' launch event in Richardson and Cruddas, Byculla, Mumbai were set to go on sale on December 6 on oneplus.in — at a price of Rs. 799 each — and seem to have been sold out ever since.