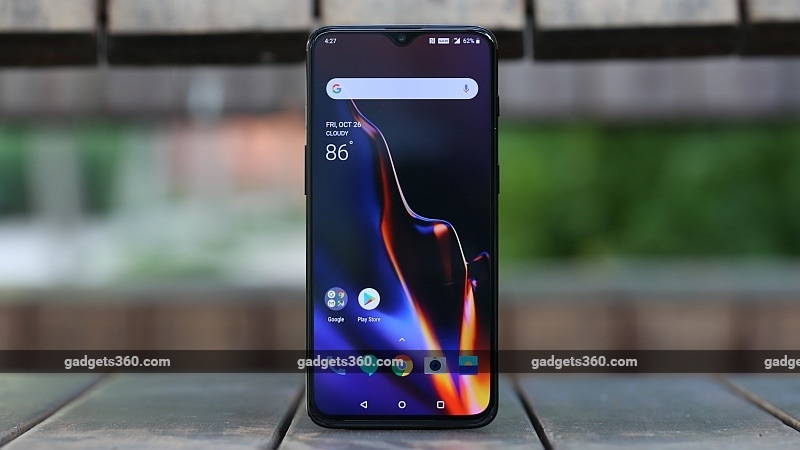 The price in India of OnePlus 6T will be officially announced at the India launch event that's set to take place at the KDJW Stadium in New Delhi starting at 8:30pm IST. The company will be live streaming the event, and you can catch the live stream below. To recall, the OnePlus 6T was globally unveiled at an event in New York yesterday. The company however did not reveal the OnePlus 6T price in India, and that's essentially what this event will be for, as we already know India release date — November 1 via Amazon India.

The OnePlus 6T offers several additions over the OnePlus 6 model it succeeds, such as an in-display fingerprint scanner, a larger battery, a larger display, a smaller notch, improved low-light photography, Android 9.0 Pie out-of-the-box, a better endowed base model, and Smart Boost optimisation. There is a prominent removal as well - the OnePlus 6T foregoes the headphone jack, with users having to rely on the USB Type-C port or Bluetooth for their audio pairing needs.

Like the OnePlus 6, the OnePlus 6T retains a single bottom firing speaker. It also features an all-glass build, like the OnePlus 6, with Corning Gorilla Glass 6 protection. The in-display fingerprint sensor is claimed to unlock the smartphone in 0.34 seconds, and works with the OnePlus screen protector - the company doesn't guarantee it will work a third-party protector. The fingerprint recognition is also self-learning, said to make it faster over time when identifying the same fingerprints.

The OnePlus 6T's Smart Boot feature that is said to improve app cold start speeds by 5 to 20 percent by caching frequently used apps - it currently will only work with gaming apps, with additional compatibility planned for the future.

OnePlus 5G Phone to Launch in First Half of 2019: Pete Lau

OnePlus is also touting improved low-light photography with a feature called Nightscene. It produces brighter images in low-light, with reduced noise, using a new HDR algorithm across a 2-second exposure, and splicing together the resultant up to 10 multi-frame shots together. It will be made available to the OnePlus 6, which has an identical camera setup, later this week.

As before, users will be able to hide the notch on the OnePlus 6T, with a UI setting. The Gaming Mode introduced in previous versions of OxygenOS also makes its way to the smartphone. The company says that a feature that lets users activate Google Assistant by long pressing the power button will soon make its way to the handset. Apart from the headphone jack, another major removal from the OnePlus 6 on the OnePlus 6T is the missing LED notification light - the company says the 'lift-up display' will allow users to conveniently read notifications from the lock screen, negating the need for an LED light.

The OnePlus 6T has a dual rear camera setup comprising a primary 16-megapixel Sony IMX519 sensor with an f/1.7 aperture and 1.22-micron pixels, paired with a secondary 20-megapixel Sony IMX376K sensor with an f/1.7 aperture and1-micron pixels. It can shoot 4K video at 60fps, Super Slow Motion Video (1080p at 240fps and 720p at 480fps). A dual-LED flash accompanies the rear setup, while there is also OIS and EIS available.

The front camera on the OnePlus 6T features a 16-megapixel Sony IMX371 sensor with an f/2.0 aperture and 1-micro pixels. The front camera also supports EIS, and can recording 1080p video at 30fps and 720p video at 30fps. Notably, both the front and rear cameras are unchanged from the OnePlus 6, and the Face Unlock feature - said to unlock the smartphone in 0.4 seconds - makes its way forward as well.

The OnePlus 6T comes with either 128GB or 256GB of inbuilt storage, not expandable via microSD card. Connectivity options include 4G VoLTE, Wi-Fi 802ac (dual-band, 2.4GHz and 5GHz), Bluetooth v5.0, NFC, GPS/ A-GPS, and a USB Type-C (v2.0) port. A USB Type-C to 3.5mm headphone jack adapter is bundled in the box. The company is touting the presence of Dirac HD Sound and Dirac Power Sound support. There is a 3,700mAh battery on board with fast charge support (5V, 4A) that's said to deliver a full day of power in 30 minutes of charge, while the OnePlus 6T measures 157.5x74.8x8.2mm, weighing 185 grams.