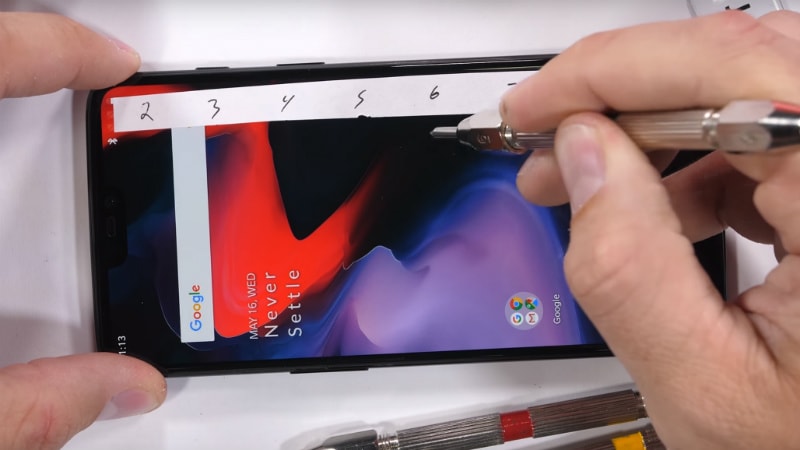 OnePlus 6 was finally unveiled with all pomp and show at an event in London on Wednesday. While the performance of the new OnePlus smartphone is yet to be reviewed, the handset has undergone a bunch of durability tests to help you determine its toughness. These come in the form of scratch, burn, and bend tests. Notably, OnePlus has an "all-glass" body with Corning Gorilla Glass 5, with glass panels on both the front and back of the handset. This is unlike the last year's OnePlus 5 and OnePlus 5T that both had a glass covering only at the front. The new model is also touted to offer "daily water resistance", though the company hasn't revealed any IP rating to support its claim.

YouTuber JerryRigEverything, who is popular for testing flagships, has this time picked the OnePlus 6. The narrator begins his video with a scratch test that uses the Mohs scale to examine the hardness of the front glass panel of the OnePlus 6 that comes with Corning's Gorilla Glass 5 branding. Scratches on the OnePlus smartphone surface at the sixth level of the scale, while some deeper signs appear at the seventh level. This is something similar to the OnePlus 5T that also resisted scratches until the Moh level six of hardness.

The sides of the OnePlus 6 are covered with the metal frame that seems to have a paint on top that can receive scratches. Also, as the YouTuber spotted, there is a plastic layer that joints the glass panels and the metal frame and helps resist shocks at some level. OnePlus has also bundled a protective case and a screen protector has been installed out of the box to make the smartphone look fresh for a longer time.

On the back, OnePlus has again used the Gorilla Glass 5 panel that appears as tough as the frontal panel. The smartphone also has the "invincible" fingerprint scanner that protects from scratches, even from the ones that come from a razor blade. Similar is the case of the glass protection available on top of the dual rear camera setup.

Coming towards the burn test, the screen of the OnePlus 6 withstood an open flame for about 20 seconds before the pixels become completely dead. The metal frame of the OnePlus 6 is also hard enough to resist from being bent. The YouTuber found some flex, though the build didn't result in any cracks or kinks even with an impressive amount of force being pushed to bend the handset.

"The metal frame is still intact and the glass remains unshadowed. I believe this is in part due to the plastic lining between the glass and the metal frame but either way this new OnePlus flagship passes my durability test and is definitely daily driver material," the YouTuber said in the video.