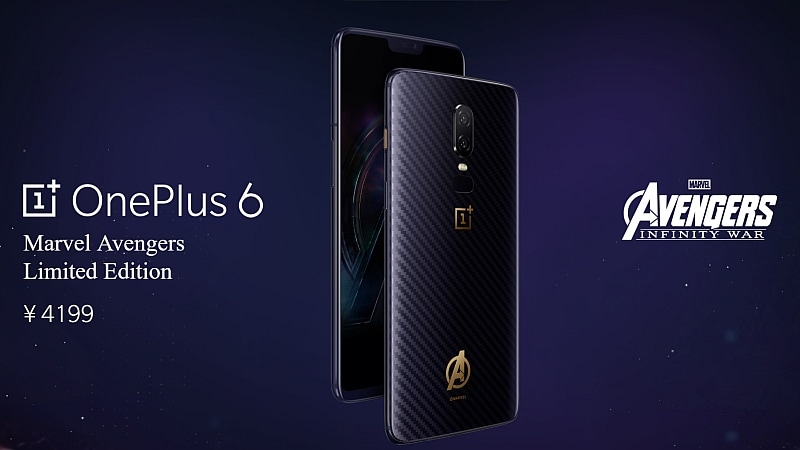 OnePlus 6 Marvel Avengers Limited Edition has been launched in China. The new launch comes a day after the latest OnePlus flagship was officially unveiled in London. The anticipated Limited Edition smartphone debuts alongside the regular OnePlus 6 variants and features a custom 3D carbon fibre textured back that sits below the Corning Gorilla Glass 5. The handset also has an Avengers exclusive gold logo to please the fans of the superhero team.

It is worth noting here that OnePlus has this time brought a significant difference between the price of its limited edition model and the regular variants. You can clearly see that the OnePlus 6 Marvel Avengers Limited Edition (with 8GB RAM, 256GB storage) is available in China at CNY 4,199, whereas the regular 8GB RAM/ 256GB storage variant is available at CNY 3,999. In the past, the company didn't bring any changes to the prices of its limited edition models. The OnePlus 5T Star Wars Limited Edition, for instance, was launched in December last year at Rs. 38,999 - a price just Rs. 1,000 more than to the regular 8GB/ 128GB OnePlus 5T variant. The OnePlus 5T Lava Red also arrived a few months back with the same price of the original 'Midnight Black' OnePlus 5T.

The more significant price difference apparently comes due to the custom treatment that makes the OnePlus 6 Marvel Avengers Limited Edition a distinct option against the regular OnePlus 6 variants. In addition to the carbon fibre back and Avengers gold logo, the Limited Edition model has OnePlus logo as well as the Alert Slider in gold colour. OnePlus has also bundled a special Iron Man protective case. Similarly, the handset comes bundled with random Avenger medal.

That being said, the specifications of the OnePlus 6 Marvel Avengers Limited Edition are identical to the regular OnePlus 6 8GB RAM/ 256GB storage variant. The dual-SIM (Nano) smartphone runs OxygenOS 5.1 based on Android 8.1 Oreo and is upgradable to Android P. It features a 6.28-inch full-HD+ (1080x2280 pixels) full Optic AMOLED display with a 19:9 aspect ratio and an 84 percent screen-to-body ratio. Under the hood, there is an octa-core Qualcomm Snapdragon 845 SoC, coupled with Adreno 630 GPU. The smartphone has a dual rear camera setup that includes a primary 16-megapixel Sony IMX519 sensor with an f/1.7 aperture, OIS, and EIS, and a 20-megapixel Sony IM376K sensor with an f/1.7 aperture. A dual-LED flash module is also available on the back. For capturing selfies and enabling video chatting, the front panel has a 16-megapixel Sony IMX371 sensor with an f/2.0 aperture and EIS. The smartphone is also capable of recording Slow Motion videos at a speed of 480fps. Moreover, the front camera doubles as a facial recognition system to enable a Face Unlock feature.

The built-in storage of the OnePlus 6 is not expandable via microSD card. In terms of connectivity, there is 4G VoLTE, Wi-Fi 802.11ac, Bluetooth v5.0, NFC, GPS/ A-GPS, USB Type-C (v2.0), and a 3.5mm headphone jack. Sensors on board include an accelerometer, ambient light sensor, digital compass, gyroscope, and proximity sensor. A fingerprint sensor is also available on the back panel that is claimed to unlock the screen in as little as 0.2 seconds. Besides, the smartphone packs a 3300mAh battery, supporting Dash Charge (5V 4A) fast charging technology, and measures 155.7x75.4x7.75mm.

OnePlus 6 Alert Slider Gets Its Old Functionality Back, Removes Do Not Disturb
Google Photos Gets Auto-Brightness Fix, Rotation, Archive Suggestions, and More