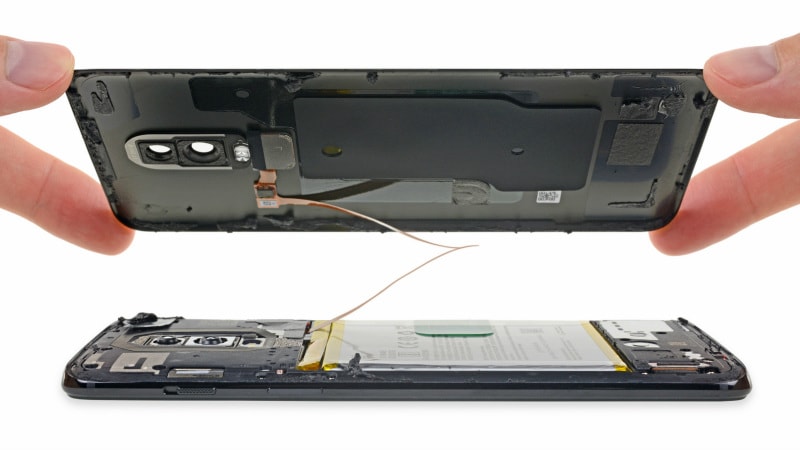 While the OnePlus 6 is already said to have managed to persuade a large number of customers on day one - at least in India, DIY repair authority iFixit has now released its detailed teardown of the latest OnePlus flagship to show us what its internals are, and how it compares with the Samsung Galaxy S9 and Google Pixel 2 XL among others. The smartphone features a notch design and has a glass back as well as includes top-notch hardware that is backed by a Snapdragon 845 SoC and up to 8GB of RAM. All this makes it a compelling option. However, the build of the new OnePlus model doesn't come with any IP ratings to highlight its water or dust resistance. This is unlike many other premium models available on the market today.

Folks at iFixit managed to examine the OnePlus 6 with an X-ray, sourced from Creative Electron, before beginning their teardown process. The X-ray shows quite a standard internal view of the OnePlus handset, though it highlights the sliding mechanism that is powering the Alert Slider. After viewing the internals before opening the chassis, the iFixit team used a heat gun to remove the glass back and dig into the OnePlus 6. The team spotted that unlike the glass back of the latest iPhone models, the glass panel of the new OnePlus smartphone is easier to remove. This helps especially to enable easier repairing of the handset.

Interestingly, the glass back of the OnePlus 6 doesn't have a wireless charging coil that is available on the newest Apple iPhone and Samsung Galaxy S families. The back, however, makes the OnePlus flagship a premium-looking smartphone, but as iFixit points out, the choice of materials inevitably makes it more prone to cracks than a metal build.

After removing the glass back panel, iFixit engineers spotted an easy-to-remove battery pack. OnePlus has pasted a green tab on the battery that describes how to remove the battery. But there is also a warning at the bottom right corner that the "battery is not removable". Having said that, the iFixit team was able to pull out the battery after removing the light adhesive. The battery importantly has a capacity of 12.70Whr, slightly lesser than the 13.48Whr battery of the Galaxy S9+ and 13.6Whr of the Pixel 2 XL.

It was also spotted that the OnePlus 6 has an oversized slider mechanism to offer the Alert Slider. "The slider button moves a hefty metal plunger, which flips a mechanical switch solder to the motherboard," the iFixit team explains slider mechanism.

Although OnePlus hasn't defined its water resistance, iFixit folks have found some attempts at waterproofing on the OnePlus 6 including through black silicone seals surrounding the flex cable sockets and gaskets covering components such as the 3.5mm headphone jack, speaker grill, and the USB Type-C port. This indeed makes the OnePlus 6 capable of resisting splashes. But of course, the company is not covering any damage through water under its warranty.

Furthermore, the teardown reveals that the OLED panel of the OnePlus 6 is firmly glued. This means it is difficult to bring the display panel out undamaged. Folks at iFixit believes that OnePlus hasn't prioritised the display replacement while designing the OnePlus 6.

Concluding the teardown, the iFixit team has given the OnePlus 6 a repairability score of 5 out of 10, with the difficult to remove display and easy to remove battery. This is higher than what the Galaxy S9 and Galaxy S9+ received in the past but is lower than the Pixel 2 XL that received a score of 6 out of 10 last year.