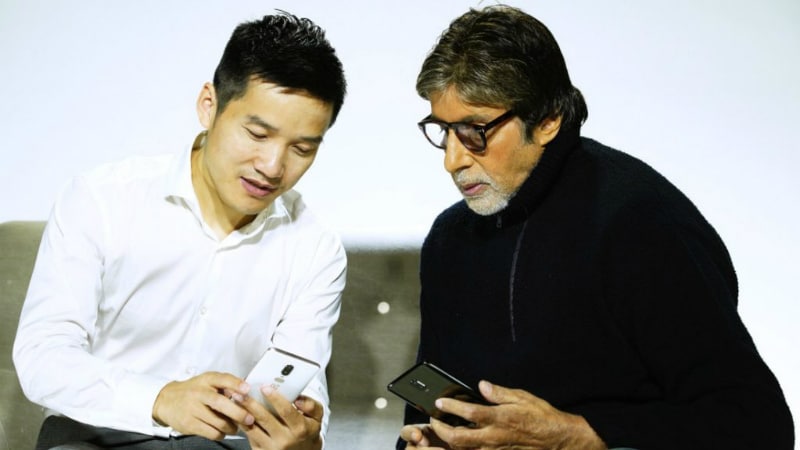 OnePlus 6 is all set for its global launch on May 16 and is arriving in India on May 17. But just days ahead of its formal debut, the next-generation OnePlus smartphone has now been spotted in Black and White colour options. The latest revelation notably emerges from none other than Amitabh Bachchan, the Bollywood star who is the brand ambassador of OnePlus in India. The star tweeted a couple of images featuring himself and OnePlus CEO Pete Lau in which the OnePlus 6 colour options are clearly visible. Incidentally, the tweet featuring the images in question was removed. OnePlus separately posted a short video on its social channels that doesn't show the OnePlus 6 but highlights the slow-motion capabilities of its camera that could power a Super Slo Mo camera feature.

The cached version of the tweet that Bachchan originally posted on Monday shows the back of the OnePlus 6 in two distinct images. The images posted by the 75-year-old actor feature him holding a Black colour OnePlus 6, while one of the two images show the OnePlus CEO with a White colour variant. The actor later removed the tweet in question and tweeted a fresh selfie with the OnePlus executive that doesn't showcase the flagship handset.

Notably, the design of the OnePlus 6 sported in the tweeted images looks identical to what has so far been leaked in the form of renders. The images also show the vertically-placed rear camera setup at the centre of the phone, and a module below the sensor that appears to be the home of a rear-facing fingerprint sensor. Moreover, it seems that the White colour OnePlus 6 has a smooth matte finish, though its Black variant has a glossy back.

In addition to the images accidentally posted by the OnePlus brand ambassador, the video posted by OnePlus through its official accounts on Facebook and Twitter teased its Super Slo Mo camera feature. This is already expected to offer video recording on the OnePlus 6 at an as high frame rate as 960fps. The handset is confirmed to have a Snapdragon 845 SoC that has sufficient power to support the new feature.

We need to wait for the official launch of the OnePlus 6 to see its various features. Meanwhile, it is safe to presume that some more teasers will be released and some rumours around the next OnePlus model will surface online.