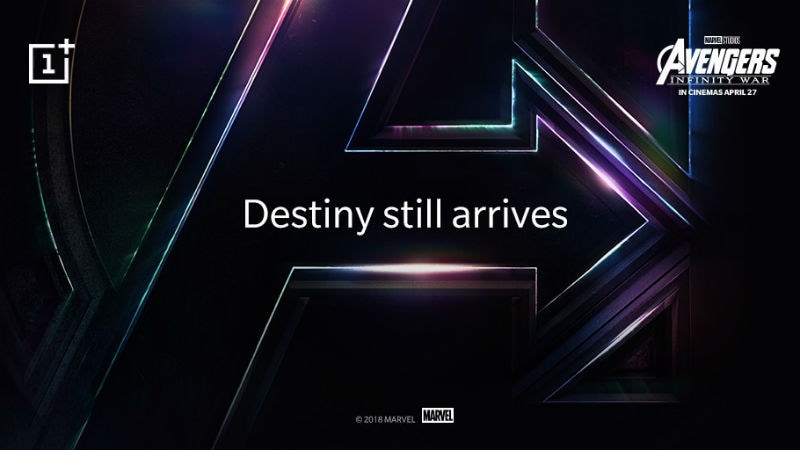 OnePlus 6 launch is expected to happen soon, and ahead of it the Chinese company on Thursday announced its partnership with Marvel Studios. The new tie-up is primarily for Avengers: Infinity War that is hitting theatres in India and the US on April 27 and extends the association between OnePlus and Walt Disney. It majorly hints the launch of an Avengers-themed OnePlus 6 that could debut around the release date of Avengers: Infinity War later this month. The official OnePlus 6 launch date has not been announced as of now. Last year, OnePlus tied up with Walt Disney Studios to launch the OnePlus 5T Star Wars Limited Edition model exclusively in India.

The news about the partnership between OnePlus and Marvel Studios first emerged through a video teaser that showed OnePlus and Avengers logos and featured an Avengers: Infinity War poster for a brief 10 seconds. It was posted on OnePlus India's Facebook page for a short while before being deleted.

"OnePlus' association with Marvel Studios is a manifestation of the enduring love and support they have garnered from its respective community over the years with a purpose to go beyond the ordinary and achieve groundbreaking innovations in mobile technology only to create the best user experiences," OnePlus writes in a press note.

OnePlus hasn't revealed any formal details about the Avengers-themed OnePlus 6. Nevertheless, it is expected to come with Avengers branding and may have some preloaded content specifically for Infinity War fans. All this is similar to what OnePlus offered with the OnePlus 5T Star Wars Limited Edition that was launched in India at Rs. 38,999.

Specifications-wise the original OnePlus 5T and OnePlus 5T Star Wars Limited Edition didn't have any noticeable changes. Therefore, it is safe to say that the Avengers-themed OnePlus 6 model will also be identical to its original model that is so far set to have a notch design and Snapdragon 845 SoC. Other leaked specifications tip a dual rear camera setup and up to 256GB of onboard storage. The handset is also speculated to come with a water-resistant build and an Alert Slider to enable 'Slide to Focus' option.