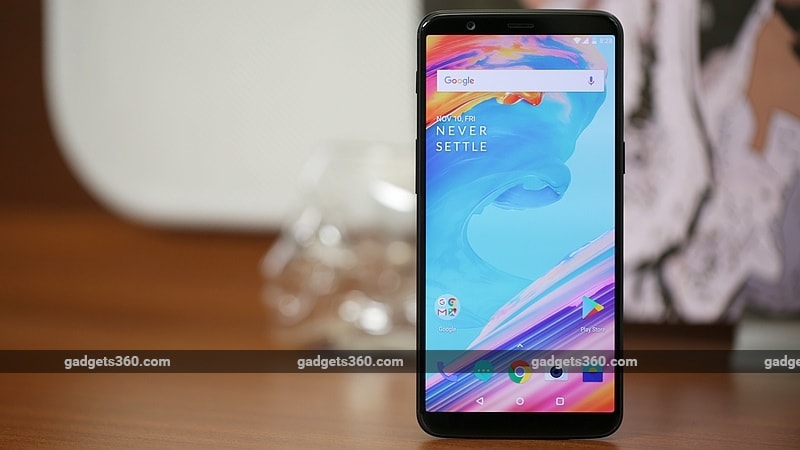 OnePlus 5T has added iPhone X-like navigation gestures through OxygenOS Open Beta 3. The new beta build also includes an India-focused SMS categorisation feature to auto-sort SMS messages into categories. The flagship OnePlus smartphone is yet to receive a final Android Oreo update. However, the Chinese company has so far released three Open Beta versions of its new OxygenOS to set the ground for the new Android version.

The very first change that OxygenOS Open Beta 3 brings to OnePlus 5T is the new navigation gestures that make the user experience similar to the button-less iPhone X. You just need to swipe up from the centre to go to the homescreen or swipe from the left to go back to last active screen. Similarly, a swipe-up-and-hold gesture opens the multitasking menu. All these gestures are there to let OnePlus 5T users completely abandon the traditional navigation bar that includes a back, home, and a recent app key.

Importantly, this is not the first time when OnePlus has blatantly copied the iPhone X. The company brought its proprietary Face Unlock feature to enable facial recognition on the OnePlus 5T, taking on Apple's Face ID that uses a combination of software and hardware to let users unlock their iPhone X simply using their faces. The Face Unlock feature was also lately arrived on OnePlus 3, OnePlus 3T, and OnePlus 5 through recent OxygenOS Open Beta builds.

The latest OxygenOS Open Beta also includes a pick-up gesture switcher that helps you choose which way you should swipe to pick up a phone call. You have up and down as the two pick-up options.

Apart from the gesture-centric uplift, the OxygenOS Open Beta 3 for OnePlus 5T removes the infamous Clipboard function that was recently in the headlines for allegedly sending user data to a Chinese server. OnePlus says in a forum post that the feature in question has been removed based on the user feedback. The new OxygenOS Open Beta also applies CPU security patch: CVE-2017-13218, which fixes a bug related to Meltdown and Spectre side channel attacks, and includes general bug fixes and performance improvements.

For its users in India, the OxygenOS Open Beta 3 for the OnePlus 5T brings the SMS categorisation function that automatically sorts SMS messages into certain categories. A similar auto-sorting feature is already available on competitive custom ROMs, including Xiaomi's MIUI.

You can install the OxygenOS Open Beta 3 build on your OnePlus 5T by flashing the latest build into the smartphone. It is recommended to back up your data as all the stored data will be lost during the flashing process. OnePlus has provided its flashing guides to help you easily install the new version. Furthermore, the new ROM version is available for download from the OnePlus site.