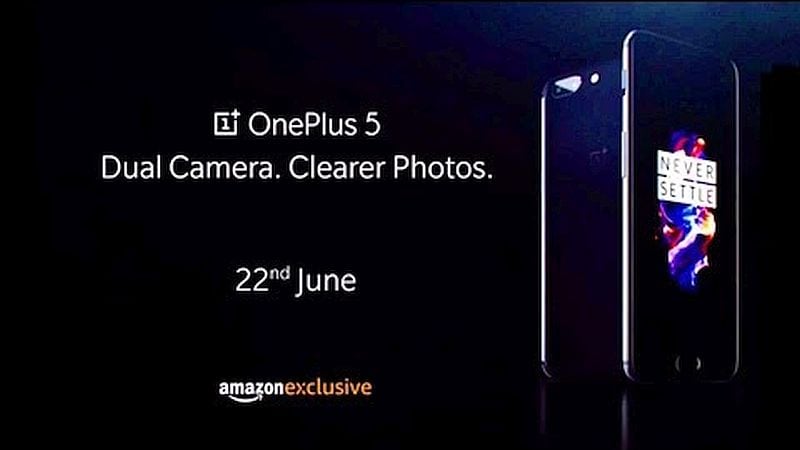 OnePlus 5, the Chinese company's next flagship smartphone, set to launch on Tuesday is already receiving tremendous response from the consumers. The smartphone crossed 5.25 lakh registrations in China ahead of Tuesday global launch. Additionally, OnePlus India revealed the OnePlus 5 in TV spot during India vs Pakistan cricket match on Sunday, while also teasing other features and camera capabilities of the OnePlus 5 in a series of tweets over the weekend.

OnePlus is taking registrations for the OnePlus 5 via JD.com in China, and at the time of writing, the registrations had topped over 5.27 lakh. It's worth pointing out that these registrations are just an expression of interest in the smartphone and do not involve any payments on behalf of those registering. The OnePlus 5 is expected to go on sale in select market starting Tuesday while in India, the smartphone is expected to go on sale on Thursday via Amazon India e-commerce website.

OnePlus has been busy creating hype around its next flagship smartphone, and has released several teasers. OnePlus India tweeted during the match, "Caught our ad during the #IndvsPak match? Tweet a screenshot of your favourite moment with #OnePlus5Launch & get a chance to win the phone!" The OnePlus 5 image shown in the image confirms the leaks so far that the smartphone looks like iPhone 7 Plus with the dual rear camera setup to boot. The phone also sports a slim profile, and is said to be "slimmest flagship smartphone" from the company, though we will need to wait until the official OnePlus 5 reveal to see if it lives up to that promise.

In a series of new tweets, the global Twitter handle of OnePlus has teased few more features like "always connected", which could be a hint at dual-SIM support on the OnePlus 5. In another tweet, the company teased charging capability of the OnePlus 5. It wrote, "charging ahead."

In yet another tweet, the company again teased the dual camera capability on the OnePlus 5. Carl Pei, OnePlus Co-founder, also teased bokeh effect in an image said to be clicked with the OnePlus 5.

The upcoming OnePlus 5 is widely expected to sport dual cameras at the back, and come with iPhone 7 Plus-like setup which is likely to be the biggest highlight. Some of the other notable specifications include Snapdragon 835 SoC (confirmed), with rumours tipping a OnePlus 5 model with 8GB of RAM.

According to various leaks, the OnePlus 5 price in India for the 6GB RAM and 64GB storage model is said to be Rs. 32,999, while the 8GB of RAM and 128GB storage model is said to cost Rs. 37,999. If these turn out to be the actual prices, the OnePlus 5 will be the most expensive OnePlus smartphone yet. A recent leak had suggested $479 (roughly Rs. 30,800) price in the US, while an earlier rumour had suggested the smartphone would cost around EUR 550 (roughly Rs. 39,900) in some European markets.

Reliance Jio Prime Membership Adoption at 90 Percent Among Those Using Jio as Primary SIM: Report
Amazon Sale Offers: Deals You Can Get on OnePlus 3T, iPhone 7, iPhone 6, and More