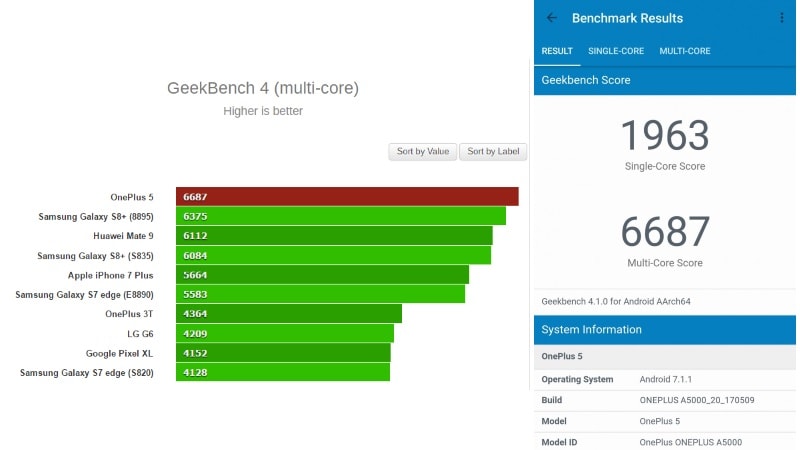 While the OnePlus 5 still has the vague launch timeline of 'Summer' this year, the smartphone's benchmark performance has made its way to the Internet. If the leaked GeekBench scores are to be believed, the upcoming flagship from OnePlus outperforms two other smartphones that also feature the Qualcomm Snapdragon 835 SoC, which is expected to be present on OnePlus 5 as well.

As per a leaked screenshot, obtained by GSMArena, the OnePlus 5 smartphone got itself an impressive score of 1963 (single-core) and a gigantic 6687 score (multi-core). Interestingly, the multi-core results helped the phone in securing top spot at the GeekBench 4 list as well. In terms of single core performance, the phone only lagged behind Apple's iPhone 7 Plus and the Exynos 8895 processor variant of the Samsung Galaxy S8+ smartphone.

This shouldn't come as a surprise as the Exynos variant of the Galaxy S8+ was able to outperform its Snapdragon 835 counterpart in earlier benchmark tests as well.

In comparison, Samsung's Galaxy S8+ (Snapdragon 835-version) managed to get a score of 1929 on single-core and 6084 on multi-core while Sony's Xperia XZ Premium smartphone managed to get a score 1943 in single-core and 5824 in multi-core, as per the report. As both these smartphones also feature Snapdragon 835 processor, the performance of OnePlus 5 seems to be extremely impressive.

Apart from the phone's performance, the screenshot also suggests that the phone will run Android 7.1.1 Nougat based on company's own OxygenOS.

The performance of pre-production units can vary drastically from the retail units and this is why we would advise our readers to wait till the phone is eventually made available to gain a wider perspective of the performance offered by the OnePlus 5.