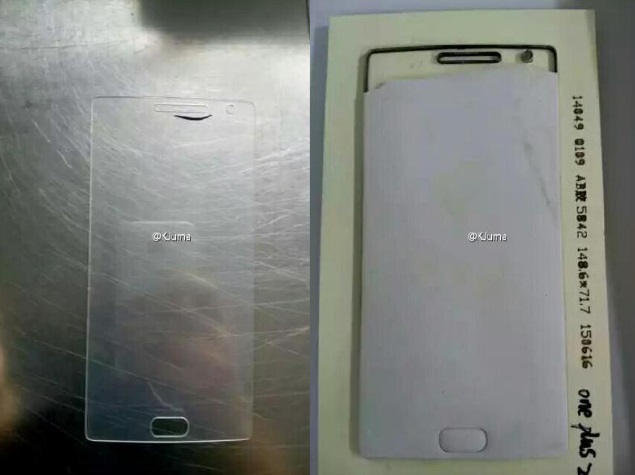 More leaks and rumours about the OnePlus 2 smartphone continue to flow in just days before the company's virtual reality event on Monday. New leaked images of the OnePlus 2 front panel have emerged on the Internet.

Out of the two new leaked images, one shows the front panels' plastic cut-out which purportedly tips the placement of the fingerprint scanner button below the display. The oval shaped button features rounded edges. To recall, the Chinese smartphone maker has already revealed that the OnePlus 2 will feature a fingerprint scanner and even made a bold statement claiming the OnePlus 2's fingerprint sensor will be faster than Apple's iPhone Touch ID sensor. OnePlus is yet to officially reveal the placement of the touch sensor - whether it will be on the home button or on the rear panel.

Another leaked image shows a white plastic build of the front panel of the handset and also tips dimensions of 148.6x71.7mm, which is smaller than its predecessor. The OnePlus One smartphone measures 152.9x75.9mm. Unfortunately, there was no word on the thickness of the upcoming OnePlus 2.

The new leaked images come courtesy tipster KJuma, the Weibo user who had earlier also posted other purported images of the OnePlus 2.

Ahead of OnePlus 2 launch next week, we already know that the smartphone will feature dual-SIM support; a 3300mAh battery; Oxygen OS (likely to be very close to stock Android); a Qualcomm Snapdragon 810 v2.1 SoC; a USB Type-C port; 4GB of LPDDR4 RAM, and possibly a metal build. The company had even tipped the pricing of the smartphone to be between $322 (roughly Rs. 20,500) and $450 (roughly Rs. 28,500).

Recently, OnePlus also teased its soon-to-be-announced OnePlus 2 smartphone by releasing camera samples of the '2016 flagship killer' in comparison with the Galaxy S6 and iPhone 6.