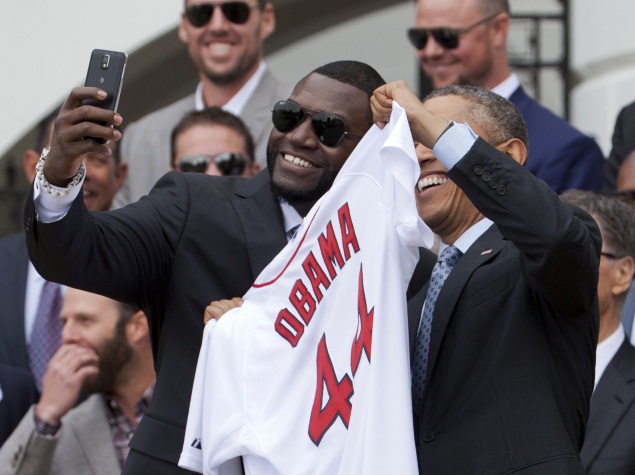 The White House warned Thursday against using President Barack Obama's image for commercial gain, after a top baseball star snapped a "selfie" with the US leader on a Samsung phone.

The company retweeted the shot taken by Boston Red Sox slugger David Ortiz on its Note 3 device, pouncing on a viral marketing coup.

But the White House, after initially holding its fire over the snap taken when the World Series winning Red Sox team met Obama, made its displeasure clear two days later.

"As a rule, the White House objects to attempts to use the President's likeness for commercial purposes," said White House spokesman Jay Carney.

"We certainly object in this case," he added, hinting that the White House counsel's office had become involved but declining to give details of any discussions with Samsung.

The selfie shows a beaming Obama alongside Ortiz, holding a Red Sox jersey presented by the team.

"When we heard about the visit to the White House, we worked with David and the team on how to share images with fans," said Samsung in a statement to the Boston Globe newspaper Wednesday.

"We didn't know if or what he would be able to capture using his Note 3 device," it said, adding however that "it was an honor to help him capture such an incredible and genuine moment of joy and excitement."

Sports Business Journal reported that Ortiz, winner of the most valuable player award in last year's World Series, has a freshly inked endorsement deal with Samsung.

The firm caused a similar stir at this year's Oscars when host Ellen DeGeneres used one of its Galaxy devices for a group selfie with a posse of smiling Hollywood A-listers.