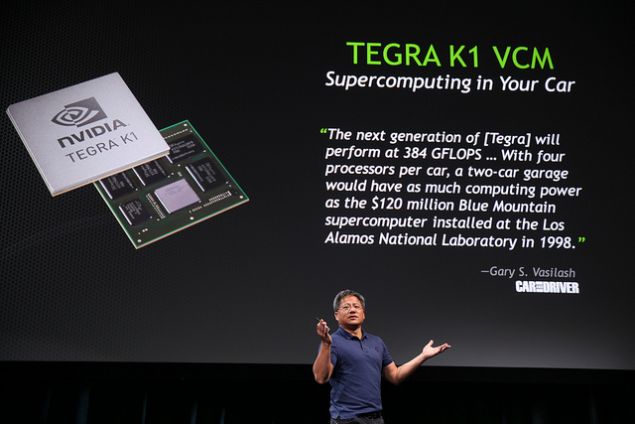 Nvidia first announced its Tegra K1 mobile SoC back in January during CES 2014. The same chip, after appearing for the first time in the recently announced Xiaomi MiPad tablet, has now been featured by a Chinese website in a number of benchmarks against Qualcomm's Snapdragon 801 SoC, and Nvidia's own last-generation Tegra 4 SoC.

The Tegra K1's GPU is based on Nvidia's Kepler architecture, used in its full-fledged PC GPUs. According to Nvidia at the launch at CES, the chip makes for a tablet more powerful than an Xbox 360 or PlayStation 3 game console, while consuming one-twentieth the power. The chipset comes with four Cortex-A15 cores clocked at 2.3GHz, plus a battery-saver core - giving the Tegra K1 its '4 Plus 1' core architecture - and a 192-core Nvidia Kepler GPU. A 64-bit Tegra K1 version is scheduled to be launched in June.

When tested on AnTuTu, 3DMark, BaseMark OS II, BaseMark X, Kraken 1.1, Sunspider 1.0.2, Google Octane 2.0, and WebXPRT 2013, the Nvidia Tegra K1 was found leading the race against the other two - quite dramatically. The device on which the SoC was tested was not mentioned. However, according to CPU-Z (via GSMArena) data, the device is running on Android 4.4.2 KitKat OS with 4GB of RAM and with a 320ppi pixel density screen.

Of course, it must be said that Qualcomm will soon be launching the even more powerful successor to the Snapdragon 801 chipset, the Snapdragon 805, with the first devices running on it expected to hit store shelves in the first half of 2014 - possibly ahead of the Xiaomi MiPad's launch in mid-June. So, to be fair, the Nvidia Tegra K1 must be pegged against the Snapdragon 805 - we're excited to see which will come out on top in that competition.

For now, there is no word on the release date, price and regional availability of the next version of Nvidia's portable console. However, we expect the portable console to go on shop floors around July, the same time when the original Nvidia Shield (Review) was introduced.
Comments