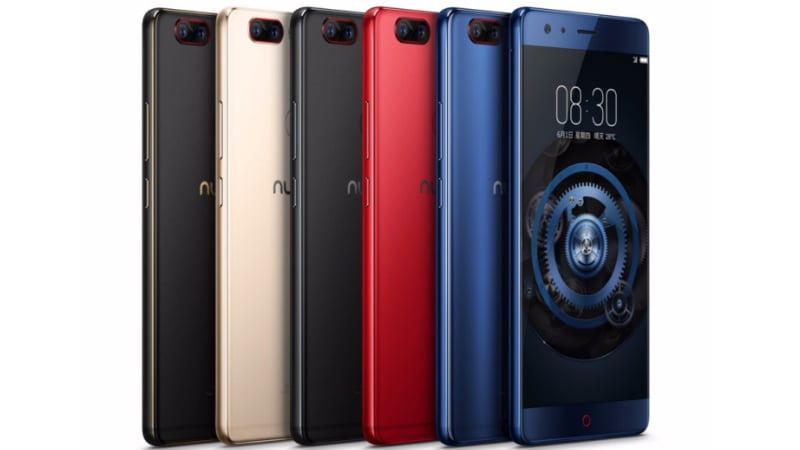 At an event in Beijing, ZTE brand Nubia has unveiled its latest premium offering – the Nubia Z17. The smartphone’s big highlights are its dual camera setup at the back, Snapdragon 835 SoC, Android 7.1.1 Nougat, and being the first smartphone with support for Qualcomm’s newly announced Quick Charge 4+. The Nubia Z17 is priced starting at CNY 2,799 (roughly Rs. 26,400).

Coming to design, the Nubia Z17 has been launched in as many as five colour options - Aurora Blue, Black Gold, Obsidian Black, Solar Gold, and Flame Red. There are no bezels on the left and right edge of the smartphone, but the top and bottom chin has bezels to support sensors, front camera, and more. The smartphone is seen sporting a sleek metal unibody with a dual camera setup at the back and a fingerprint sensor in the middle. The volume and power buttons are both housed on the right edge of the smartphone.

As for specifications, the Nubia Z17 runs on Android 7.1.1 Nougat based on Nubia 5.0 UI. The smartphone features a 5.5-inch full-HD (1080x1920 pixels) IPS LCD display, and is powered by the latest Snapdragon 835 octa-core processor paired with Adreno 540 GPU. The dual camera consists of one 23-megapixel and one 13-megapixel lens that support 2x optical zoom, 10x dynamic zoom, f/1.8 aperture, LED flash support, and more. At the front, there is a 16-megapixel sensor for selfies and video chats.

The Nubia Z17 packs a 3200mAh battery, and is the first to support Quick Charge 4+ which means that the smartphone can be charged up to 50 percent in just 20 minutes. Additionally, there is also a feature called NeoPower 3.0 that has been introduced. It essentially suspends unnecessary background processors amping up battery life to up to 2.4 days in one single charge. Connectivity options include Bluetooth 4.1, Wi-Fi 802.11 a/b/g/n/ac, GPS, GLONASS, NFC, Infrared port, and USB Type-C port. The dimensions measure at 152.6x72.4x7.6mm, and the smartphone weighs 173 grams.