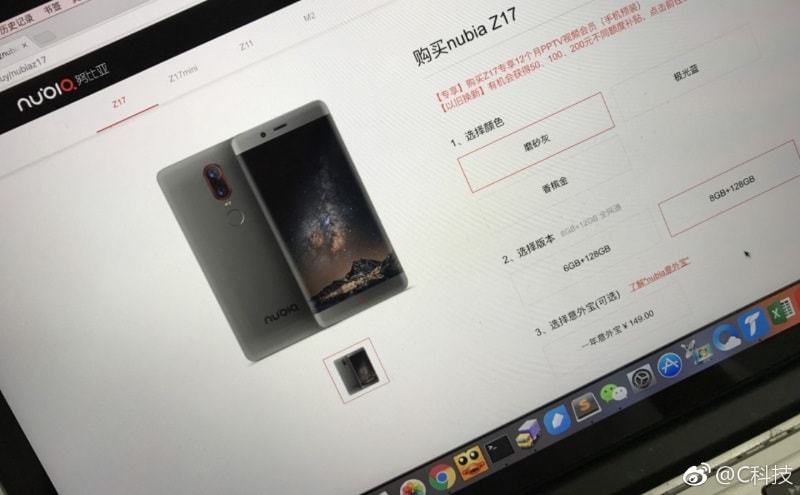 While ZTE brand Nubia launched its Z17 mini smartphone in China last month, the absence of a regular Nubia Z17 smartphone (non-mini version) surprised many. Now, a leaked listing of Nubia Z17 has given us a glimpse of some of the specifications of the upcoming smartphone. One particular aspect that seems to stand out from rest of the specifications is the memory offered by the smartphone as the listing suggests that Nubia Z17 will come with an 8GB RAM variant.

The screenshot of the leaked listing, shared by a Weibo user, indicates that the Nubia Z17 will be made available in two memory + storage variants, i.e. 8GB + 128GB and 6GB + 64GB, as pointed out in a report by The Android Soul. In the leaked screenshot of the listing, the smartphone is clearly visible from front as well as back and seems to sport a near bezel-less curved display. At back, Nubia Z17 has a dual-camera setup in vertical orientation right above the fingerprint scanner, which is located in right in the middle. The listing of the smartphone shows the Nubia Z17 in Gray colour.

Some of the other specifications on the smartphone include a 5.5-inch display, a Qualcomm Snapdragon 835 processor, 23-megapixel +12-megapixel dual-camera setup at the back, as per the report. The smartphone is also expected to run Android 7.1.1 Nougat and come with support for Qualcomm Quick Charge 4.0.

As this is a leak, we will advise readers to take this information with some scepticism and wait for the official announcement from the company for confirmation.