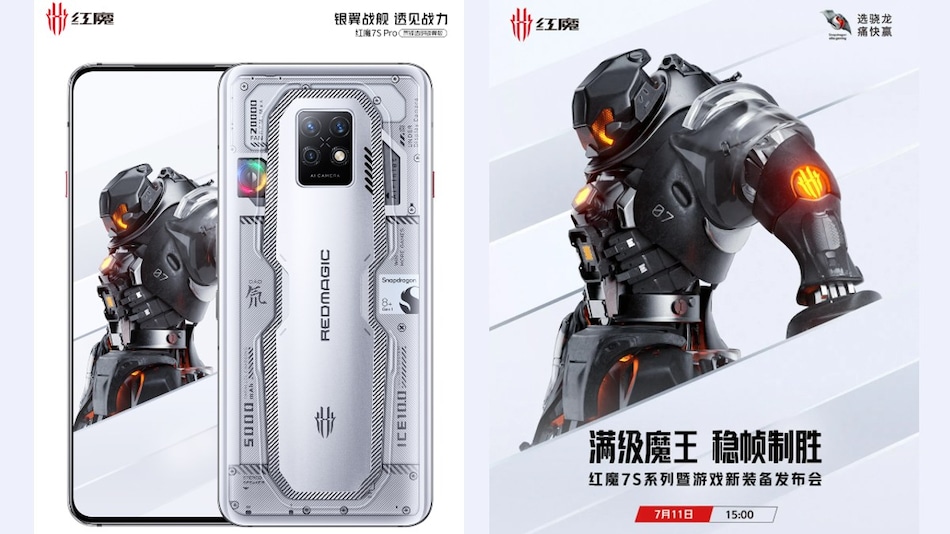 Nubia Red Magic 7S and Red Magic 7S Pro gaming smartphones will be launched on July 11, and the alleged specifications of both the smartphones have been suggested by the purported listing on TENAA. Both the smartphones are suggested to come with Qualcomm's Snapdragon 8+ Gen 1 SoC paired with up to 18GB of RAM. At least one of them is indicated to pack up to 1TB of storage. Both the handsets will come equipped with a 64-megapixel main camera sensor.

The Nubia Red Magic 7S series will be launched in China on July 11 at 3pm local time (12.30pm IST). Nubia has also revealed the images of the smartphones showing the design of the Red Magic 7S Pro. Reportedly, it is the Red Magic 7S Pro Tritium Front Transparent Silver Wing Edition (translated) with Silver colour back panel and uses the under-screen camera. It seems to have a cooling fan with RGB lighting support.

The listings show that both smartphones will be equipped with a 6.8-inch full-HD+ (1,080x2,400 pixels) displays reportedly with 120HZ refresh rates. Under the hood, both will carry a Qualcomm Snapdragon 8+ Gen 1 SoC paired with 18GB of RAM options. The Red Magic 7S could be offered in 8GB, 12GB, and 16GB options as well, and the Pro variant may get a 12GB as well as 16GB option. The phones could also come with some kind of cooling technology.